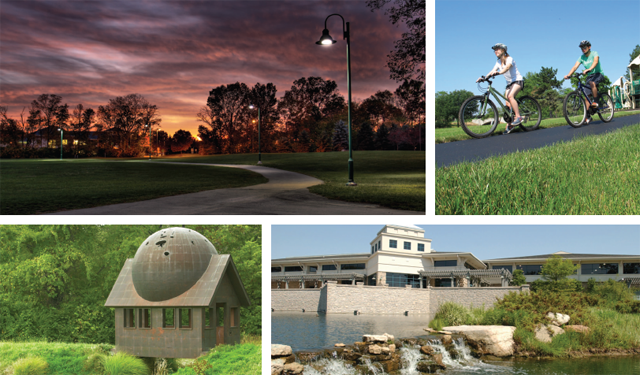 It’s an art gallery, a festival grounds, and the site of City Hall, the Dublin Community Recreation Center and one of Dublin’s oldest homes. It has seen frogs jumping, ice skating and costume-wearing ghouls and goblins. It’s been the backdrop for a wedding, family reunions and a Guinness Book world record-setting Irish jig.

In the heart of Dublin, Coffman Park plays a central role in the active lives of residents, City leaders and local employees. The 105-acre park at 5200 Emerald Pkwy. encompasses land that was once the farm of one of Dublin’s first settlers, Fletcher Coffman and his wife, Marinda. Their house, which was built between 1862 and 1867, remains on the land and is now home to the Dublin Historical Society.

Coffman Park has seen many changes as it has morphed from a small city park to the center of civic life in Dublin.

“What it is today is not what it’s going to be tomorrow,” says Fred Hahn, director of Parks and Open Space for the City. “It continues to evolve and grow and we’re not done yet. It’s in its adolescence. It’s not anywhere near its mature state.”

When Hahn began working for the City in 1985, Coffman Park totaled 26 acres, 17 of which were de-veloped, and featured two shelter houses, three tennis courts, a basketball court, a restroom, a playground, City Hall and the Fletcher Coffman Homestead.

The park’s expansion really began around that time, with the support of Dublin City Councils past and present, Hahn says. The next phase of the park was the field where the pavilion is located today, just east of the eventual site of the Dublin Community Recreation Center. “We really made a conscious effort and went to a lot of design effort to make it conducive for special events,” he says. As a result, underground conduits were installed to provide electricity, which have proven especially useful for musicians and vendors at the Dublin Irish Festival.

When voters approved a bond issue to build the Recreation Center, Hahn recalls several sites were being considered. “We were moving forward at the time. It was going to be north and west of where the Justice Center is (today at 6565 Commerce Pkwy.),” he says. “The other site being contemplated was by where Dublin Methodist Hospital is today. Fortunately, the other parcel considered was the next major acquisition,” and is where the Recreation Center stands today.

As the City began acquiring more land adjacent to Coffman Park, a master plan was being developed and an ad hoc committee, the Coffman Park Task Force, was formed to provide a concept for the park and the role it could play. “We started thinking beyond what we actually owned,” Hahn said. “It became more visionary.”

In the meantime, Coffman Park has been allowed to develop naturally, providing a scenic environment that crosses the South Fork of Indian Run. Post Road was abandoned at the southern edge of the park and a permanent foot bridge was added near the same point to allow pedestrians access to the southern acreage. Both improvements have provided great benefits to the Irish Festival allowing a separate space for sporting events and the Celtic Rock Stage.

The Irish Festival is by far the biggest event held in Coffman Park, which also plays host to the Kiwanis Frog Jump, Sherm Sheldon Fishing Derby and the City of Dublin’s Halloween Spooktacular, as well as many of the City’s recreational programming throughout the year. Kitty Munger, one of the founders of the Dublin Irish Festival, says she had no idea the event would grow to attract more than 100,000 people when the first one was held in 1988.

“The festival was actually an offshoot of the Columbus Feis moving to Dublin Coffman [High School],” she says. That first year the only stage was set up on the tennis courts, where local bands played.

Even though it started out small, each year the festival has added elements and continues to grow. A highlight occurred in 1997 when festival-goers set the first world record for the number of people dancing an Irish jig, as documented by Guinness Book of World Records.

“I think Coffman Park is really the perfect venue for the Irish Festival,” Munger says. She notes the availability of nearby parking, the large open fields and convenient access to Interstate 270. “It’s easy to find, very clean and a very safe environment,” she says. “It’s in a really good location.” 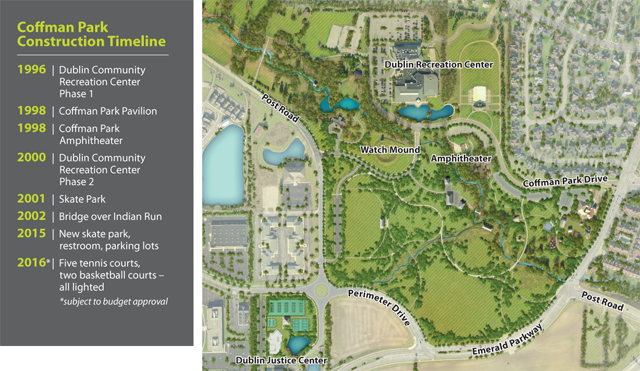 As the festival has grown, so has Coffman Park. Through-out the years, Hahn says more development has occurred with two new separate playgrounds created: one a traditional, manufactured variety and the other one the kind that blends with the natural environment. Along the way, the pavilion was built; an amphitheater was added; and bocci ball courts, two smaller shelter houses and restrooms were constructed.

The next phase, slated to begin this year, will move the park’s hard courts closer to the Justice Center creating what Hahn calls “a heavy activity zone.” These are the areas that take intense use and will include two basketball courts, five tennis courts and a new skate park – all of which will be lighted. In addition, the activity zone will have its own parking area.

But one of the things that Hahn likes best and calls the “feel good” aspects of Coffman and other City parks is the unprogrammed areas where families can have picnics, adults can idle away time on a bench, children can play tag and anyone can throw a Frisbee. “There’s a lot of flexibility in the design,” he says. “There’s a luxury to unprogrammed areas.”

Of course, some like to have a say in the programming that takes place. It’s not unusual for the community to request certain amenities in the parks, but it’s not every day that a teenager petitions a public body and a few years later realizes his “pipe dream.” Yet that’s what happened when Nick Koogler, now 28, was in the seventh grade.

“When I was in middle school, a lot of my friends and I would skateboard in our neighborhoods and around elementary schools and we always got kicked out,” he says. “So, we all got together and petitioned the City for someplace safe to skateboard.”

Koogler created PowerPoint presentations outlining their ideas, which he delivered at City Council and Planning and Zoning Commission meetings. “It was an unbelievable experience, especially for a young kid,” he says.

His advocacy led the City to work with Koogler and his friends to create the first skate park in Coffman Park. Koogler was invited to the ribbon-cutting ceremony, which took place in December 2001.

Now a dentist with Comfort Dental in Grove City, Koogler, a 2004 Dublin Scioto High School graduate, admits his profession doesn’t always align with his passion. “I carry a couple of my cards in my wallet,” he says of those times when he hits the skate park near his office. 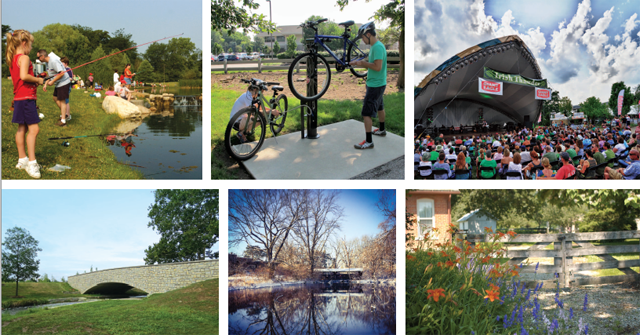 “One of the real buzzwords in public art is place-making,” says David Guion, executive director of the Dublin Arts Council. “The idea that you make a place by activating it in some way.”

Guion says that’s what has happened as a result of placing pieces from the City’s Art in Public Places collection in Coffman Park. “People just interacting with the park – skating during the winter and the Irish Festival during the summer – it just seemed like the right location for public art to be installed,” he says.

The Watch House by Todd Slaughter was the first piece of public art installed in Coffman Park and was placed there in 1998. Since that time, One Scene by Daisuke Shintani, Exuvia by Todd Smith, Ascension by Brian Russell, Injection by David Middlebrook and Narrow #5 have joined the outdoor gallery.

“It’s just a beautiful park,” Guion says. “When you can incorporate public art into settings like that, it just enhances the space. I think the whole idea of happening upon public art is really intriguing. As long as people are learning and engaging in art – that’s our mission.”Hahn says he likes the idea of seeing the artwork throughout the park and hopes there’s more to come in the future.

The Best is Yet to Come

As far as land mass, Hahn says the vision for Coffman Park has been fulfilled, but programming may change in the future. “There may be things that no one can conceive of today,” he says. And after 30 years of being a part of creating parks and watching the City’s developed green spaces grow from four parks to 60, Hahn says it’s been a rewarding experience. “We have received all of this recognition from the community of what a great park system we’ve developed here,” he says. “No one takes it for granted. So much has happened during this time and so much more is going to happen.” “Coffman Park has evolved and transformed over time to what the community needs it to be.”