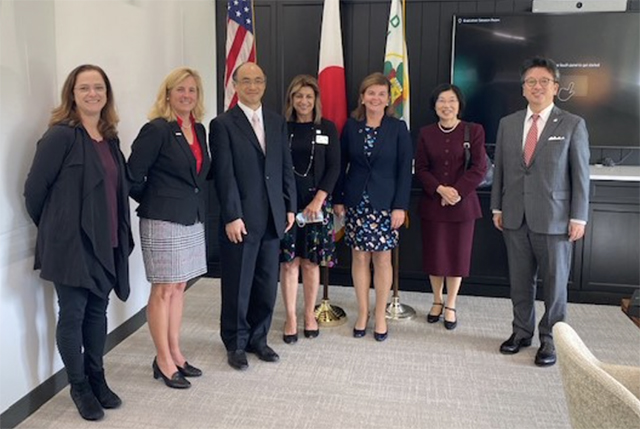 Council members reiterated the City’s commitment to delivering the world-class, innovative business services, programs and partnerships that make Dublin the best possible environment for businesses to recruit talent and thrive.

The Consul General in Detroit also emphasized that a primary part of his role is to ensure the safety of Japanese Nationals. This region is also home to about 14,000 Japanese residents in Michigan and another 10,000 in Ohio.

“The Consulate General makes every effort to ensure the safety and well-being of these Japanese residents, and we aim to provide meticulous, high-quality consular services,” Sindo stated. “These operations, anchored in local communities, contribute to the strengthening of grassroots-level connections between the U.S. and Japan.”

Dublin is proud to be a vibrant and culturally rich City that is committed to ensuring a welcoming environment for all. City Council looks forward to working with Mr. Shindo and continuing to strengthen the valued relationship between Dublin and the people of Japan.

Dublin is a global city and is home to a diverse community. The 2020 Census indicates 20.3% of Dublin residents are of Asian descent, the highest concentration of any Ohio city. According to the Consulate General of Japan in Detroit’s 2020 Japanese Direct Investment in Ohio survey, Dublin is home to 30 Japanese-owned businesses with over 480 employees. Dublin City Schools is one of Ohio’s most diverse school districts, with students from more than 70 countries speaking more than 60 languages.

Dublin’s Japanese ties are reflected throughout the community. The Central Ohio Japanese Association of Commerce (COJAC) and the Japan-America Society of Central Ohio (JASCO) are located in Dublin.

In 2015, the Friendship City partnership between the City of Dublin and Mashiko, Japan, marked Dublin’s first official international cultural exchange. Mashiko is a town located in Haga District, Tochigi Prefecture, in Japan. With a population of around 25,000, Mashiko is known for its pottery or mashikoyaki. The art form has even made its way to Dublin through exhibits by artist Masayuki Miyajima at the Dublin Arts Council.