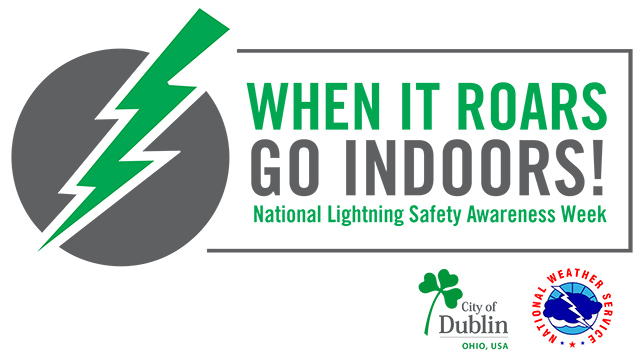 Summertime is Peak Time for Thunder and Lightning Storms

In an annual coordinated effort with the National Weather Service (NWS), the Ohio Committee for Severe Weather Awareness is promoting June 23-29 as National Lightning Safety Awareness Week and encourages all Ohioans to know what to do before, during and after thunderstorms, and to practice severe weather safety and preparedness throughout the summer.

Although lightning strikes can occur at any time during the year, summertime is usually peak season for thunder and lightning storms. Since the inception of Lightning Safety Awareness Week, lightning fatalities in the U.S. have dropped from about 50 per year to an average of 30 or less per year. The NWS attributes this reduction to this weather safety campaign and to a greater awareness of lightning danger, and people seeking safe shelter when thunderstorms threaten.

As of Friday June 14, four people have died after being struck by lightning in the United States this year. In 2018, there were 20 lightning fatalities in a total of 10 states; no fatalities in Ohio (NWS 2019 Lightning Fatalities).

There is no safe place outside when thunderstorms are in the area. If you hear thunder, you are likely within striking distance of the storm. Lightning safety is can save your life.

The NWS and the Ohio Committee for Severe Weather Awareness encourage Ohioans to prepare for thunder and lightning storms – and all severe weather events.

To minimize the risk of being struck by lightning, just remember “When Thunder Roars, Go Indoors!” and stay indoors until at least 30 minutes after the last sound of thunder or crack of lightning.

For additional information on lightning safety, visit the Ohio Committee for Severe Weather Awareness, ReadyOhio, or the NWS site at www.weather.gov/safety/lightning.

The City of Dublin uses the Thor Guard Lightning Prediction System in several community parks including both community pools. The system predicts lightning strikes by measuring electrostatic charges on the ground and in the air. Thor Guard is a computerized system that can predict the probability of a lightning strike within 8-20 minutes before it will strike. The system is 97% accurate within a 2 mile radius.

When there is a potential for a lightning strike within the coverage area, a strobe light will turn on and a warning horn will sound with an uninterrupted 15-second blast. Immediately upon hearing or seeing these signals park and pool users should leave the area and seek appropriate shelter even if it does not appear that severe weather is imminent. Anytime lightning is visible, the best course of action is to seek shelter immediately. When the system senses conditions are safe, the strobe light will turn off and the horn will sound three short, four-second blasts. Then normal activity may then resume. The system operates 7 a.m. – 11 p.m. seven days per week from March through November.

The Thor Guard Lightning Prediction System is installed at five locations throughout the City. Lightning sensors and horns are located at Avery Park, Darree Fields, Emerald Fields and at both Community Pools. The lightning prediction sensor at each location operates independent of the others.

This system is designed to help you assess conditions. Neither the signal, nor the system is intended to guarantee that conditions are safe.

Additional information can be found at www.thorguard.com