Speed Limits – Where do they come from?

Where do speed limits come from?

First, it is important to understand where the concept of speed limits came from. Most of our laws, including traffic regulations, are based on observations of the way reasonable people behave under most circumstances. Generally speaking, traffic laws that reflect the behavior of the majority of vehicle operators are found to be successful, while laws that arbitrarily restrict the majority of drivers encourage wholesale violations, lack public support, and usually fail to bring about desirable changes in driving behavior. This is especially true of speed limits.

Driving is an extension of social attitude and the majority of drivers behave in a safe manner as demonstrated by their favorable driving records. In the case of speed limits, the safe speed on a roadway should be able to be determined, in large part, by observing how the majority of safe, prudent drivers are currently driving. Public acceptance of this concept is normally instinctive, but in some cases emotion can cause individuals to reject this principal and rely, instead, on more comfortable and widely held misconceptions.

“Before and after” studies consistently demonstrate that there are no significant changes in traffic speeds following the posting of new or revised speed limits. Furthermore, no published research findings have established any direct relationship between posted speed limits and accident frequency.

Realistic speed limits serve as a clear reminder of reasonable speeds for nonconforming violators or drivers unfamiliar with the area and help inject logic into an otherwise arbitrary and often emotional issue. 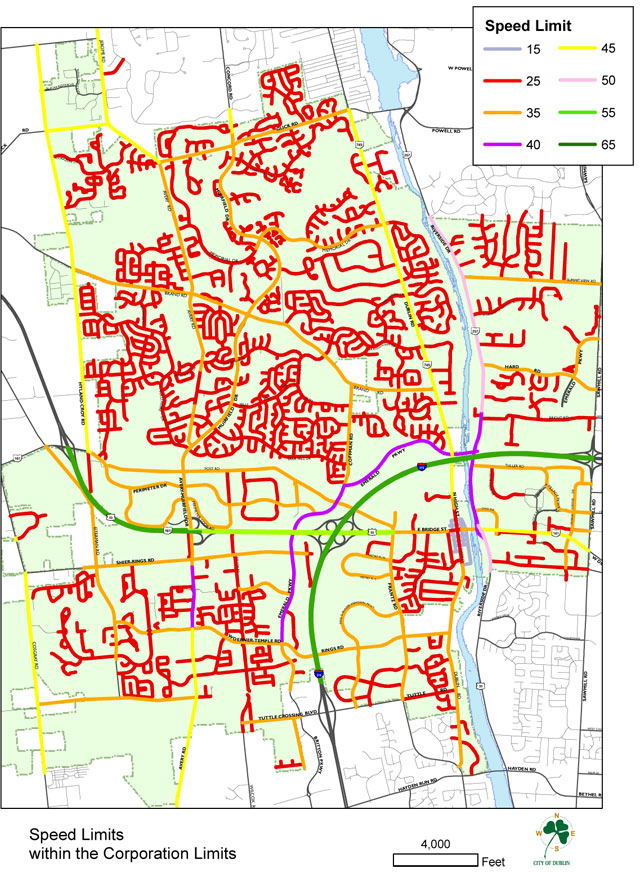 So who sets the speed limits?

Speed limits are under the jurisdiction of the state government. The Ohio Revised Code (ORC) establishes general speed limits for different types of roadways in section 4511.21.Â Some examples of the ORC applied to municipal areas are listed below:

Click here to view speed limits in the city. The posted speed limit takes precedence over the above list and map. 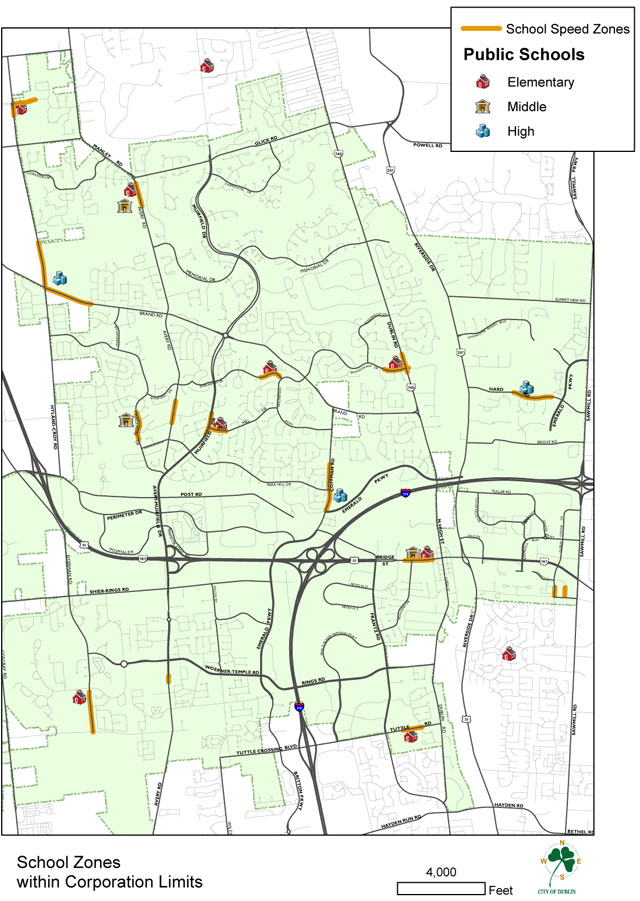 School zones are defined as a section of roadway fronting a school between the school property lines projected to the street. School zones are in effect during school recess and while children are going to or leaving school during the opening or closing hours. The speed limit in a school zone is 20 mph. The typical morning and evening times that school flashers operate on normal school days for Dublin City Schools within the Dublin city limits are as follows:

Click here to see a map of the school zones within the city. The ORC takes precedence over the above list and map.

If a speed limit established by the ORC is not appropriate for a certain location, an engineering study may be submitted for consideration to the Ohio Department of Transportation. Upon review and approval from the state, the speed limit may be changed. The study includes data such as existing travel speeds, roadway character, development density, and crash history. The state has the authority to approve or disapprove any speed limit change request they receive.

For the full text in the ORC on speed limits, please click the following link: http://codes.ohio.gov/orc/4511.21.

Sources: Establishing Speed Limits – A Case of “Majority Rule” published by the Arizona Department of Transportation