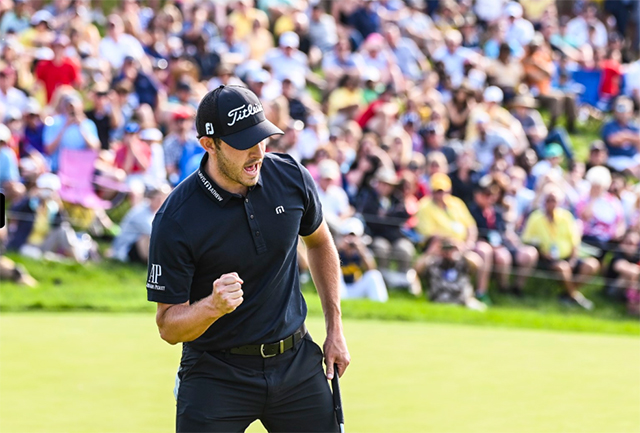 The Memorial presented by Nationwide would like to recognize the successful efforts led by Governor DeWine, Lt. Governor Husted and Dr. Amy Acton in the fight against the spread of COVID-19. The State of Ohio has been a leader in identifying the tremendous threat that began to appear in January and was one of the first to take drastic action to curb the spread and reduce deaths. Their implemented plan has produced encouraging results and allowed for the slow process of opening the State to business and gradually allowing Ohioans to return to a level of normalcy, including the ability to permit patrons at this year’s Memorial. With the support of the PGA TOUR, who the Tournament has worked jointly with throughout this process, the Memorial is looking forward to partnering with State, County and City leadership, along with the Memorial COVID -19 Task Force, to offer the Memorial Tournament presented by Nationwide as an example of how public gathering events can be developed and implemented with approved and accepted protocols in place.

THE MEMORIAL TOURNAMENT PRESENTED BY NATIONWIDE RESCHEDULED FOR JULY 13-19, 2020; TOURNAMENT SET TO FEATURE FIELD OF 144 PLAYERS

Tournament access plan will be determined prior to event

Dublin, Ohio – Officials of the Memorial Tournament presented by Nationwide announced today that the 45th edition of the world-renowned event founded and hosted by Jack Nicklaus has been rescheduled as a result of the ongoing health crisis related to the Coronavirus pandemic.

In conjunction with today’s PGA TOUR adjusted tournament schedule announcement, the 2020 Memorial Tournament will now be contested the week of July 13-19 at Muirfield Village Golf Club and feature an increased field from 120 to 144 players. The invitational’s one-time expanded field size allowance will provide additional playing opportunities for touring professionals in light of the TOUR’s reduced schedule.

“This is an unprecedented time in our world, as well as the world of sports,” said Founder and Host Jack Nicklaus. “I can’t emphasize enough the message related to doing your part by social distancing and helping our nation and world by slowing this pandemic. But while we all need to come together and be strong, we also need to be understanding and flexible. When the PGA TOUR was looking at how and when to revamp the golf calendar, the Memorial Tournament was quick to raise its hand and step up, and offer support for a new date. Like all of you, I was saddened to see tournaments and major championships postponed, and The Open Championship cancelled for 2020. But we appreciate the PGA TOUR giving the Memorial Tournament the opportunity to fill that void in the schedule with these July dates and to bring golf to Central Ohio. We were also happy to expand our field, as so many players around the world have lost opportunities to make a living. If a gesture so small can help some of them recoup their losses, we are all for it.”

“This has been a couple months we would soon like to forget, but hopefully we can make this a summer to remember.”

Recognizing Governor DeWine’s Ohio Stay at Home order and public gatherings ban guidelines currently in place, the Memorial will proceed with an understanding that its operation may require alterations. The Memorial Tournament presented by Nationwide will continue to offer patron badges, enhanced with a special offer that includes honoring original presale badge rates – starting at $185 for a weekly patron badge – and a complimentary $20 merchandise card (limit one per order, per household) redeemable at all on-site golf shops during Tournament week. However, the Tournament will also monitor the State of Ohio COVID-19 regulations and will employ changes relative to patron access if needed. If it is determined that the Memorial Tournament presented by Nationwide will be staged without patrons, a full refund policy will be implemented.

“All associated with the Memorial Tournament are encouraged to be able to reschedule the event for the week of July 13th,” said Dan Sullivan, the Tournament’s executive director. “Although many unknowns remain, we are hopeful the next few months provide an opportunity for everyone to return to a level of normalcy and central Ohioans will be able to publicly come together. The health and safety of everyone associated with the Memorial Tournament and the Greater Columbus community is and will continue to be the No. 1 priority for the Memorial, our presenting sponsor Nationwide and the PGA TOUR, as we navigate this ongoing and very fluid situation. We understand the concerns regarding large public gatherings as it relates to COVID-19, and it is important to stress as we prepare for the 2020 Memorial Tournament presented by Nationwide, that we are working closely with the PGA TOUR and local medical professionals, while continuing to follow the advice and recommendations of Governor DeWine and Dr. Amy Acton as well as the World Health Organization and the Centers for Disease Control. We are focused on offering an environment that includes allowing patrons and guests, yet we remain committed to a responsible, thoughtful and transparent decision-making process via regular updates as we continue to monitor the progress of COVID-19 and consider a number of options for the Tournament moving forward.”

As always, we encourage our fans to stay informed on the developments of the Novel Coronavirus COVID-19 through official sources such as the Centers for Disease Control and Prevention website (cdc.gov) and coronavirus.ohio.gov/.

For more information about the Memorial Tournament presented by Nationwide, please visitthememorialtournament.com. For the latest news and updates on social media, follow the tournament

The public may call the Tournament Ticket Office 9 a.m.-5 p.m. weekdays at 877-MT BADGE (877-682-2343) or visitwww.memorialbadges.com to purchase badges. Kids 18 and under can attend the Tournament for free with a ticketed adult.

About the Memorial Tournament presented by Nationwide

The Memorial Tournament presented by Nationwide is held annually at Muirfield Village Golf Club in Dublin, Ohio, a suburb of Columbus. The Tournament, founded and hosted by Jack Nicklaus, is conducted each year with three goals in mind: to honor the memory of individuals living and deceased who have distinguished themselves in the game of golf; to showcase the world’s best golfers competing on one of the most challenging venues in the world for the enjoyment of spectators; and to benefit many Greater Columbus Charities in alliance with the Nicklaus Children’s Healthcare Foundation, Nationwide Children’s Hospital and numerous other local organizations. For more information, visit www.thememorialtournament.com or call 614-889-6700.

Nationwide, a Fortune 100 company based in Columbus, Ohio, is one of the largest and strongest diversified insurance and financial services organizations in the United States. Nationwide is rated A+ by both A.M. Best and Standard & Poor’s. An industry leader in driving customer-focused innovation, Nationwide provides a full range of insurance and financial services products including auto, business, homeowners, farm and life insurance; public and private sector retirement plans, annuities and mutual funds; excess & surplus, specialty and surety; pet, motorcycle and boat insurance. For more information, visit www.nationwide.com. Follow us on Facebook and Twitter.

Nationwide, Nationwide is on your side and the Nationwide N and Eagle are service marks of Nationwide Mutual Insurance Company. © 2020

PONTE VEDRA BEACH, FLORIDA – The PGA TOUR has announced that a full-field tournament has been scheduled for July 6-12 at Muirfield Golf Club in Dublin, Ohio, through a partnership with Workday, Inc. a leader in enterprise cloud applications for finance and human resources.

Featuring a 156-player field and $6.2 million purse, the Workday Charity Open will be held without the general public attendance the week prior to the Memorial Tournament presented by Nationwide, filling the week vacated when the 2020 John Deere Classic was cancelled on May 28. Domestically, the event will include Thursday-Friday afternoon coverage and early Saturday-Sunday coverage on Golf Channel, with CBS Sports anchoring the weekend coverage.

“We are extremely pleased to join with Workday and Muirfield Village Golf Club to present this new event as we continue our Return to Golf efforts,” said Andy Pazder, Chief Tournament & Competitions Officer for the PGA TOUR. “Our special thanks go to Workday for partnering with us as title sponsor and for their pledge to make a significant charitable impact with the event. Memorial Tournament host Jack Nicklaus has always done what is best for the game of golf and in these unprecedented times, we are most appreciative of his Muirfield Village Golf Club hosting the event the week prior to the Memorial Tournament presented by Nationwide.”

Charitable impact will be an important aspect of the new event as Workday is committing $1 million in support of the Nationwide Children’s Hospital in Columbus, Ohio. In addition, Workday is donating $500,000 to the Oakland-based Eat. Learn. Play. Foundation founded by three-time NBA champion and two-time MVP Stephen Curry of the Golden State Warriors and entrepreneur, host and The New York Times bestselling author Ayesha Curry.

“We’re absolutely thrilled to bring viewers one of the first live golf events of this truly unprecedented year,” said Aneel Bhusri, co-founder and CEO, Workday. “We’d like to use this moment to not only unify the golf community through this tournament, but to drive awareness and support for these and other notable causes.”

Eat. Learn. Play. is designed to help ensure an equal road to success for all kids, rooted in three of the most vital pillars for a healthy childhood— nutrition, education and physical activity. Stephen, Ayesha and their partners believe that children are the future, and they are deeply dedicated to empowering them and opening doors for their futures. It is their hope that Eat. Learn. Play. will positively impact children in the Oakland, San Francisco, and Bay Area communities and beyond to live out their dreams.

The Workday Charity Open will be operated by the staffs of Muirfield Village Golf Club, the Memorial Tournament and HNS Sports Group. The new event will lead into the Memorial Tournament presented by Nationwide, one of three elevated events on the PGA TOUR that offers a three-year exemption to its winner and a limited field of 120, to which it will revert back after having been adjusted to 144 with the announcement of the reimagined PGA TOUR schedule on April 16.

The John Deere Classic will return to the PGA TOUR schedule in 2021.

Muirfield Village Golf Club was the dream and work of Jack Nicklaus. His revolutionary design became the first course in the world, from its inception, that was created with the spectator in mind. Nicklaus’s creative use of “mounds” and “amphitheaters” became a model for tournament courses around the globe. The course was officially dedicated in 1974 and the first Memorial Tournament was played in 1976. In 2013, Muirfield Village Golf Club became the first course in the world to host three of golf’s most prestigious international match-play competitions: Ryder Cup (1987), Solheim Cup (1998) and Presidents Cup (2013).

The PGA TOUR, headquartered in Ponte Vedra Beach, Florida, co-sanctions more than 130 tournaments on the PGA TOUR, PGA TOUR Champions, Korn Ferry Tour, PGA TOUR Latinoamérica, Mackenzie Tour-PGA TOUR Canada and PGA TOUR Series-China. Members on the PGA TOUR represent the world’s best players, hailing from 29 countries and territories (93 members are from outside the United States). Worldwide, PGA TOUR tournaments are broadcast to 212 countries and territories in 23 languages. Virtually all tournaments are organized as non-profit organizations to maximize charitable giving. In 2019, tournaments across all Tours generated a record $204.3 million for local and national charitable organizations, bringing the all-time total to more than $3 billion.

Fans can follow the PGA TOUR on PGATOUR.COM, the No. 1 site in golf, on the PGA TOUR app and on social media channels, including Facebook, Instagram (in English, Spanish and Korean), LinkedIn, Twitter, WeChat, Weibo, Toutiao and Douyin.