What is a TIF? Tax Increment Financing

Tax Increment Financing (TIF) is an economic development mechanism available to local governments in Ohio to finance public infrastructure improvements and, in certain circumstances, residential rehabilitation. TIF districts (TIFs) are implemented at the local level and may be created by a township, municipality or county. Payments derived from the increased assessed value of any improvement to real property beyond the original value are directed towards a separate fund to finance the construction of public infrastructure defined within the TIF legislation.

TIFs are established through legislation passed by City Council that:

Only those public infrastructure improvements directly serving the increased demand arising from the real property improvements to the parcel(s) or an Incentive District are eligible for Tax Increment Financing. 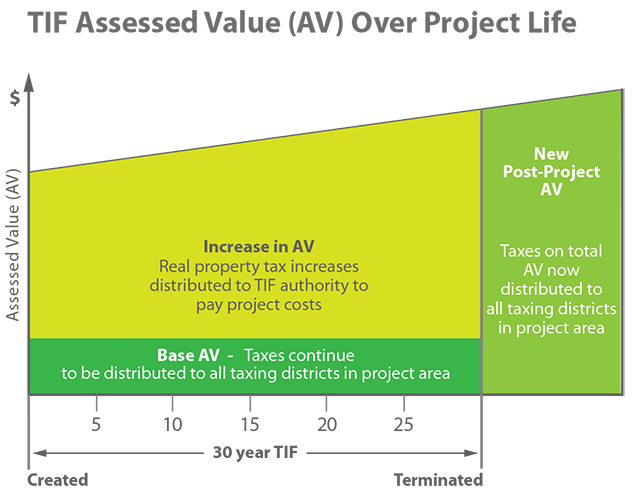 Why does the City of Dublin use TIFs for its development projects?

TIFs are one of many economic development tools used to help retain, expand and attract businesses into a community or otherwise increase investment in property and property values.

The City of Dublin, like many other municipalities throughout the State of Ohio, has utilized Tax Increment Financing as an important economic development and financing tool for the past 25 years to provide key infrastructure funding for the development and redevelopment of targeted types of economic development projects. If Dublin had not made use of this important tool over that time period, the City would have far less robust economic base (the source of our income tax revenue and our healthy property tax base) and a much less developed infrastructure system.

What are the advantages of TIFs?

One key benefit of TIFs is the projects being assisted continue to be responsible for making payment equivalent to all of the required property taxes. Instead of property taxes, however, the property owner makes “payments in lieu of taxes”, which equal the property taxes that would have been collected had a TIF not been in place. The revenue from the payments in lieu of taxes is used by municipalities to provide the public infrastructure improvements needed by these new development projects, thus benefiting the TIF area.

In Dublin, the primary use of TIF proceeds has been for roadway improvements and other infrastructure needed to support the properties within the TIF. Therefore, the property owners are truly paying for the improvements that are benefiting their respective TIF areas, and thereby allowing the proposed development projects to move forward. For the vast majority of these TIF projects, the development or redevelopment would not occur without the infrastructure funded by the TIF.

How do TIFs differ from tax abatements?

As compared to another economic development tool utilized by many municipalities, tax abatements, TIFs are not a forgiveness of the normal real estate tax payment obligation. When an abatement is granted some or all of the property taxes are abated, meaning the property owners pay a lessor, or no property taxes for a specified time period.

In these instances, the property owner may or may not be required to make the infrastructure improvements benefiting their development site using the savings from the foregone property taxes. With the exception of a limited area within the Bridge Street District, the City has generally stayed away from tax abatements and instead utilized TIFs. And even within the Bridge Street District, the property owners on the abated land are required to make payments toward their supportive infrastructure that are equivalent to the normal real estate tax obligation.

Are there specific qualifications that must be met for the City to consider a TIF for a project?

Many projects in Dublin are not appropriate for the use of a TIF. Generally, to be considered for a TIF, a proposed project needs to:

Many times a TIF-funded public improvement will both facilitate a critical economic development project to occur in Dublin while simultaneously creating the funding of critical roadway improvements, or a series of public improvements, which provide a much broader bundle of transportation benefits to the entire City – but could not have been funded at that time without the TIF. A good example of this is the attraction of Cardinal Health global headquarters to the City of Dublin and the 20-year build out of Emerald Parkway – the City’s east-west connector. Generally TIFs that help achieve or advance multiple public goals improve the likelihood of their use.

For a traditional commercial TIF, the City is required to outline in the legislation the improvements that will be funded through the service payments generated. There must be a clear connection between the revenues received from a TIF and the use of those funds to benefit the designated TIF area. These improvements can be modified (expanded upon) over time, but in no instance can a TIF be in place for more than 30 years.

What factors are considered during the decision-making process of implementing a TIF?

When a developer or a company comes forward with a potential development or redevelopment opportunity, the infrastructure improvements that will be needed to support the development will be outlined. Oftentimes, the costs of these improvements create too much of a financial barrier for the project to move it forward so the Developer will look to the City to help fund those improvements.

The City first looks at:

The City then looks at the value of the private improvements that are proposed and the estimated revenue stream that would be generated from the service payments if a TIF were to be put in place to fund the infrastructure. In looking at both the economics of the project as well as the overall public benefit of the improvements to the community at large, the City will determine if it is willing to put a TIF in place.

It is important to note that if the City is unwilling to contribute to the infrastructure improvements needed to facilitate a new development or redevelopment project, it is highly likely the project would not be feasible in Dublin, and the developer would look to another community to provide the needed assistance to make their project possible – losing the benefits of both the private investment (and its income tax revenues and increased real property tax base) and the associated public investments including enhancements to the City’s transportation system. Many times the answer for the request to use this important economic tool will be no.

The City’s use of TIFs over the past 25 years has been beneficial to all governmental entities by creating one of the healthiest tax bases anywhere, enabling and supporting our very high quality of life, and adding significant property value such that all taxing entities will continue to benefit in the future.

As of December 31, 2016, 35 active TIF districts were in place (two residential and 33 commercial). Using TIFs, within those 35 districts, $176.2 million had been invested by the City on important TIF-related public infrastructure improvements, which in turn had generated more than $657.5 million in private investment. This extraordinary private value benefits all taxing entities. Without utilizing Tax Increment Financing, it is very likely that this level of private value growth would not have occurred within the City.

The City’s smart land-use planning, strategic economic development programs, well-planned infrastructure facilities, and extraordinary levels of public services collectively have produced the well-balanced commercial and residential development we enjoy today. The City’s investment in infrastructure, utilizing these invaluable tools like Tax Increment Financing, has helped maintain and grow the property values which benefit all of our taxing entities.