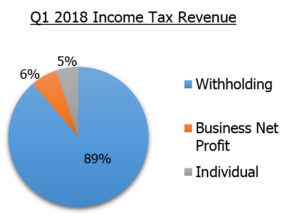 The graph below depicts the City’s first quarter income tax revenue each year from 2014 through 2018.

Based on receipts through the first quarter, property tax revenue in 2018 increased 16.0% or $307,793 over 2017. The total amount collected was $2,230,444 which was distributed between the Capital Improvements, Parkland Acquisition and Safety Funds. A portion of this increase is attributable to the 8.4% overall increase in property valuation that occurred within the City limits between 2017 and 2018.

Revenues generated from service payments, or payments in lieu of taxes, on properties within the Tax Increment Financing (TIF) areas increased 1.8% over 2017. Thus far, total collections for 2018 have been $4,721,133.

The Tax Incentive Review Council (TIRC) will be meeting on May 1, 2018 to discuss the status of the City’s TIF areas. Information compiled for that meeting will be shared with Council in mid-May and will include the current and prior year’s valuation of each parcel within each TIF district.

As a reminder, for hotel stays beginning in January 2016, City Council increased the funding provided to the Dublin Convention and Visitors Bureau (DCVB) from 25% to 35% of the actual bed tax revenues. This will need to be kept in mind when comparing the revenue from year to year. The amount for the DCVB is deposited directly into a separate fund established solely for their portion of the tax revenue. Through March 2018, the hotel/motel tax revenue which is dedicated to the DCVB was $211,022, an increase of $22,791, or 12.1% over the first quarter 2017.

Similarly, for hotel stays beginning in January 2016, City Council modified the agreement with the Dublin Arts Council (DAC) which provides that organization with 25% of the actual bed tax revenues as opposed to 25% of an estimated amount. Through March 2018, the DAC had received $119,328 in net revenue (after the deduction for rent and the art in public places program), which was an increase of $17,650 over their payment through the first quarter of 2017.

While income tax revenue is the most influential on the General Fund’s overall revenue position, as noted above, there are a number of other categories that contribute to the overall revenue of the fund. Notable variances between the revenue received in the 1st quarter of 2018 versus 2017 are as follows:

Charges for Services – Decrease of 33% is attributable to the timing of invoicing for fuel to Dublin City Schools and Washington Township and subsequently receiving the revenue.

Fines, Licenses and Permits – Much of the revenue generated in this category is a function of development activity throughout the City. As compared to the first quarter of 2017, planning revenue decreased nearly $22,000. This decline was largely offset by an increase in building revenue in excess of $18,000. Additionally, cable franchise fees decreased nearly $24,000.

Interest Income – An increase of 76% is attributable to not only a rising interest rate environment but also the Finance Department completing a liquidity analysis in 2017 which resulted in additional funds being invested.

Other Financing Sources – The revenue in this category is comprised of transfers and advances from other funds to the General Fund, largely representing repayment of advances made to facilitate capital improvements within the City’s TIF funds. The amount of repayment are primarily determined as part of the annual Capital Improvement Program and Operating Budget and are depending on the availability of TIF revenues. Variations from year-to-year, or quarter-to-quarter are irrelevant and do not reflect a positive or negative financial position of the City.

Clearly, the significant variance in General Fund expenditures is attributable to the increase in Transfer and Advances. As Council will recall, the General Fund advanced $18,000,000 to the Capital Construction Fund, which represented the cost of the GMP contract with Turner Construction Company, Inc. for the Downtown Dublin parking garages and associated roadway improvements and landscaping enhancements south of the Grounds of Remembrance. Additionally, $4 million was transferred for the purchase of the property located at 5555 Perimeter Drive. Finally, over $1.9 million was transferred out of the General Fund to the Capital Improvement Tax Fund pursuant to the City’s General Fund Balance Policy (based on the year-end fund balance) (Ordinance No. 02-18). Excluding transfers and advances, the general expenses of the General Fund decreased $3,053,880 or 19% over 2017.

Notable variations for the remaining categories are as follows:

Personal Services –This category of expenditures is reflective of personnel activity approved as part of the annual Operating Budget as well as negotiated contract agreement with the City’s three bargaining units. In addition to wage increases for personnel (union employee increases are effective January 1 while non-union employee increases are effective March 1), funding levels for employee (and family) insurance increased for 2018. Additionally, overtime increased over 146% as a result of the harsh winter resulting in numerous snow/ice events.

Other Charges and Expenses –This category of expenditures decreased substantially over the first quarter of 2017 as a result of a decrease in economic development incentive payments and income tax refunds. Economic development incentive payments declined over $1 million based on the active incentives in place and the performance of those companies. While income tax refunds are impossible to predict, the City had a one-time net profit refund due in early 2017 to a company that moved out of the City limits, skewing comparisons of this category.

As Council is aware, the General Fund advanced money to the Capital Construction Fund in the amount of $18,000,000 for the CML parking garage, roadway system and landscape enhancements (Resolution No. 04-18 approved by City Council January 22, 2018 authorized the construction contract with Turner Construction Company; Ordinance No. 02-18 approved by City Council February 12, 2018 authorized the advance from the General Fund). This advance reduced the General Fund Balance. Had the advance not been done, the General Fund Balance would have been $54,540,563, or 75.4% of the budgeted 2018 operating expenditures. This advance will be repaid once long-term bonds are issued for this project.