In the 2017 Operating Budget, Staff projected $84,734,100 in revenue from the local income tax, with 75% or $63,550,575 programmed in the General Fund, and 25% or $21,183,525 programmed in the Capital Improvements Tax Fund. This estimate was based on a 5.8% decrease over the 2016 actual income tax revenue and took into account the loss of revenue anticipated from Nationwide Insurance and JP Morgan Chase. 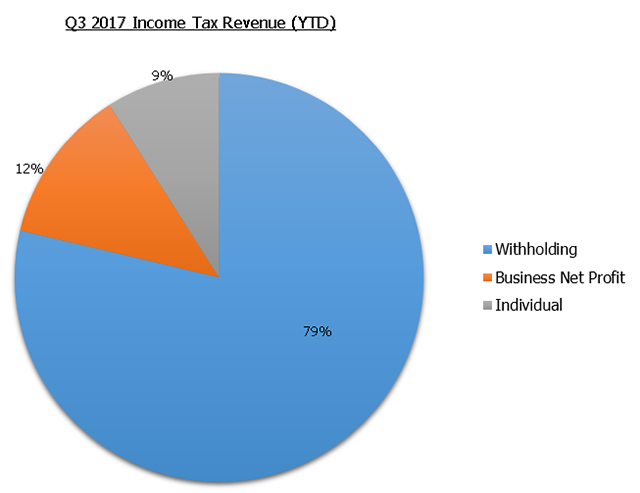 To reiterate, the decline we are currently experiencing is consistent with what we anticipated when projecting our 2017 income tax revenue. The positive news is that our receipts are still ahead of budget by nearly 3.1% or $2 million. We monitor income tax revenues on a daily basis and should there be any activity that causes us concern, we will notify City Council.

The graph below depicts the City’s third quarter income tax revenue each year from 2013 through 2017.

Property tax revenue in 2017 increased 2.3% or $79,196 over 2016. The total amount collected was $3,580,813 which was distributed between the Capital Improvements, Parkland Acquisition and Safety Funds.
Revenues generated from service payments, or payments in lieu of taxes, on properties within the Tax Increment Financing (TIF) areas increased 25.2% over 2016. Total collections for 2017 were $9,195,281.

As a reminder, for hotel stays beginning in January 2016 (remitted to the City in February 2016), City Council increased the funding provided to the Dublin Convention and Visitors Bureau (DCVB) from 25% to 35% of the actual bed tax revenues. Therefore, FY 2017 is the first full year in which the reduced amount to the City is recognized. This needs to be kept in mind when comparing the revenue from year to year. The amount for the DCVB is deposited directly into a separate fund established solely for their portion of the tax revenue.

Similarly, for hotel stays beginning in January 2016, City Council modified the agreement with the Dublin Arts Council (DAC) which provides that organization with 25% of the actual bed tax revenues as opposed to 25% of an estimated amount.

The following reflects the amounts paid to the DCVB and the DAC through the third quarter in 2017 versus 2016:

Excluding the repayment of advances, General Fund revenue totaled $56,002,118 through September. This was a decrease of $566,813 or 1.0% over the September YTD 2016 receipts. The reason for the decrease in revenue is attributable to decrease in income tax revenue, which declined 3% through the third quarter of 2017 versus 2016. Growth in receipts in other areas was realized but not enough to entirely overcome the decline in income tax revenue. A breakdown of the revenues is as follows: