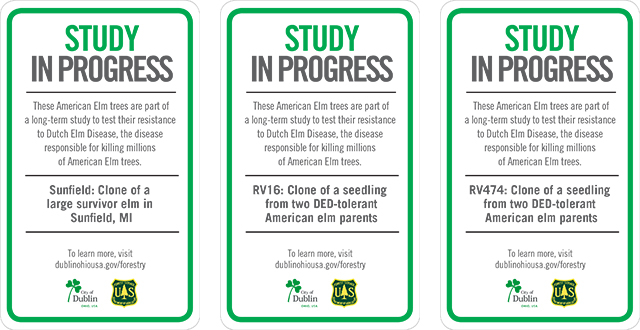 The City of Dublin has partnered with the U.S. Forest Service to conduct a study of the American Elm tree.

The U.S. Forest Service has been working for decades to develop American Elm trees that are tolerant to Dutch Elm Disease (DED), the disease responsible for killing millions of American Elm trees. As part of a 10-year study that launched in Fall 2019, three American Elm Trees have been planted in Coffman Park, across from Coffman Pavilion.

Testing has determined that these American Elm selections are highly tolerant to the disease:

DED-tolerance is critical to restoring American Elm, but is not the only trait of importance. American Elms planted in cities and towns need to tolerate many stressors, such as soil compaction, exposure to road salt, sunscald, drought and heat. To test a variety of urban environments, the trees have also been planted in Columbus, OH, Philadelphia, PA and Newark, DE as part of the study.

The trees have been planted between 16 and 30 feet apart in a row (or triangle), without competition from other trees or shrubs, and ideally in a location where they will receive full sunlight. Gel irrigation mats and 5’ tall fencing will be installed around each elm. Tree survival, growth, health, and form will be evaluated over time.