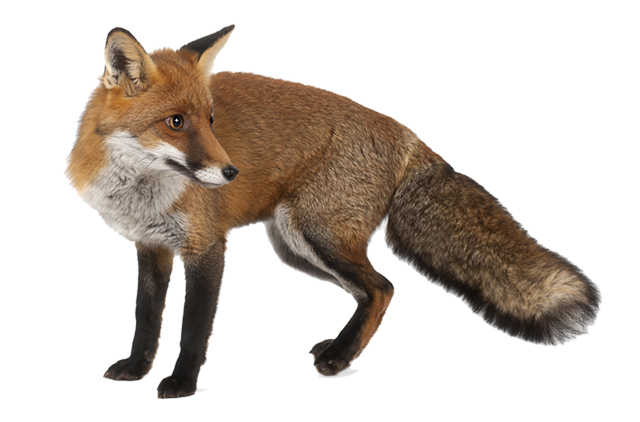 Although it can have several color variations, the red fox takes its name from its most common color phase: a rusty-red or reddish yellow coat from its face down its back and sides. Its undersides, throat area, and cheeks are white. The legs, feet, and outside of the ears are black; its long, bushy tail has black hairs mixed with the red and ends in a white tip. This feature can be used to help identify it; the gray fox’s tail has a black tip. The tail of the red fox is usually between 14 and 16 inches long.

Sometimes, young wild animals will approach domestic pets or possibly even a child out of curiosity or to see if the ‘other being’ might like to play. Fawns will play with dogs in people’s backyards, juvenile fox will play with almost any other young animal who will play with them, and so on.

We get frequent calls about young fox on front porches who don’t readily run away when approached. Those fox were likely raised nearby and do not know to be fearful of humans yet. We recommend hazing them to teach them from a young age to move away from humans.

However, if you see a fox actually approaching people, he may be ill. There are a number of parasites and disease that may lead to the neurologic changes to cause a wild fox to lose its fear of or even approach humans or other animals it would not normally get near. Most common are severe mange, high worm or tick loads, distemper, eosinophilic meningoencephalitis (a type of progressive brain disease that occurs occasionally in foxes who seem to be more susceptible to the toxic effects of worm infestations such as baylisascaris roundworm; encephalopathy can mimic rabies, distemper or head trauma). All of these are problems that, on the outside, may not be obvious, but behavior changes occur and some of those changes result in abnormal or atypical behavior.

Mange is caused by parasites that irritate the skin. Fox with mange bite and scratch to relieve the itching, leading them to lose a lot of fur. In advanced stages, fox may wander around during the daytime, seemingly unafraid. They are not looking to harm people or pets. If you see a fox that may have mange, the best way to help is to leave them alone and report it to the City. If the City is able to track down the fox, the mange is treatable with medication.

Never feed a wild animal, this habituates the animals to approaching humans. Teach children to leave wildlife alone, retreat from the area and tell an adult. Hazing can be done by waving arms, looking big and making noise. If an animal does not run off it may be ill. Notify the City along with when and where you saw it, so it can be found and taken to wildlife rehabilitation.