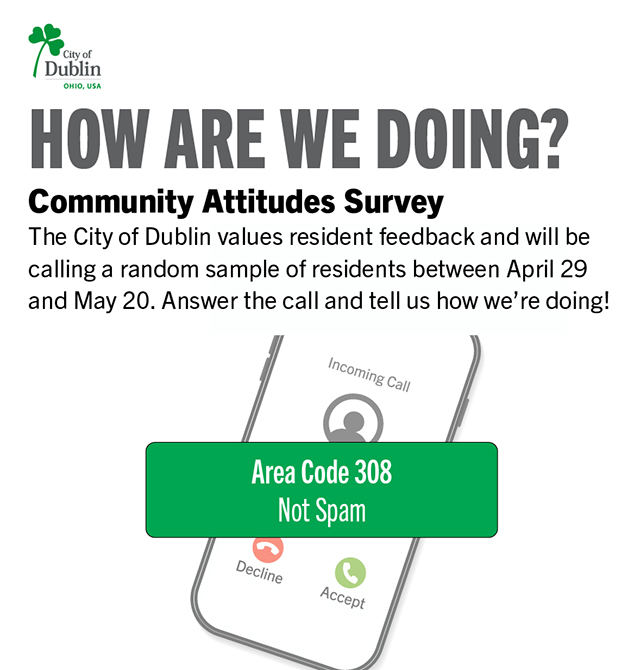 The City of Dublin has contracted with Saperstein Associates to conduct the 2022 Community Attitudes Survey. The firm’s researchers will be calling randomly selected Dublin residents between April 29 – May 20 to conduct a telephone survey. Resulting data will be published later in 2022.

Important: these phone calls will be coming from the 308 area code
The City sincerely requests that residents answer the call and participate in the survey, which should take approximately 15 minutes to complete.

“We highly encourage randomly selected residents to take part in this important research. We’re always striving to better serve our community, and I can’t think of a better way to accomplish that than talking directly with residents.” said City Manager Dana McDaniel.

The Community Attitudes Survey is conducted via telephone every few years, soliciting a range of opinions from randomly selected residents. This research gives residents of Dublin yet another voice. It allows the community to express opinions on a variety of issues and, in doing so, provides City officials important data in planning for the future.

The last Community Attitudes Survey was conducted in 2016. The City uses the data in guiding policy decisions to enhance and continue high-quality service delivery. In 2013, respondents cited parking in Dublin’s Historic District and traffic as their highest priorities. As a result, City officials have invested energy and resources into these areas. 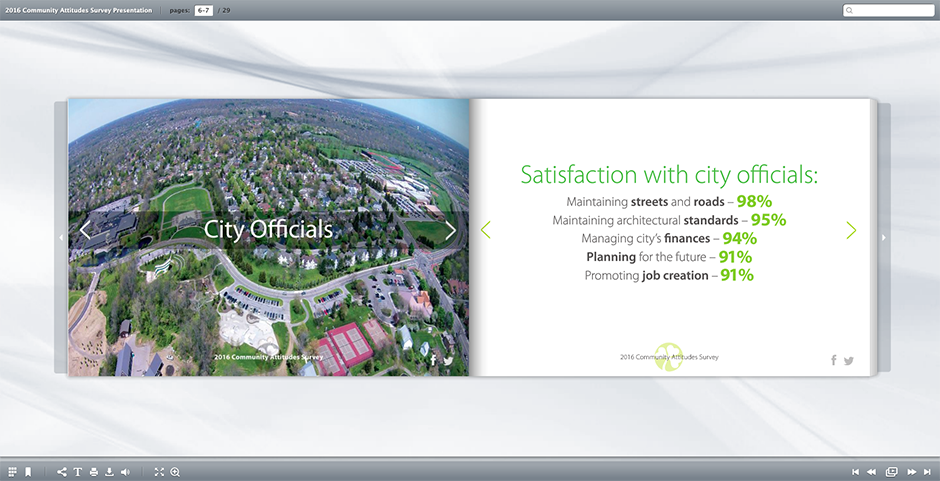 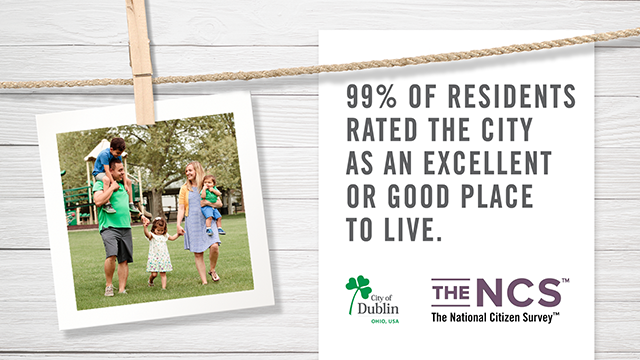 The 2018 National Citizen Survey was conducted via mail in partnership with the National Research Center. Questions and their administration are standardized to assure high quality research methods. A total of 495 out of 1,500 randomly selected residents representing all four wards responded.

The survey data helps measure resident perceptions of livability, governance and city services, and is used in guiding policy decisions to enhance and continue high-quality city services and quality of life in Dublin.

Results from the latest survey reveal 99% of residents consider Dublin an excellent or good place to live, ranking #7 in the NCS total database compared to communities across the country.

In the area of community characteristics Dublin ranked higher than national benchmarks in most areas. In particular respondents rated the following positively:

Residents rated all aspects of local leadership and governance higher than national benchmarks, with Dublin among the highest ranked in the NRC’s database. Confidence in City government, acting in the best interest of residents, and honesty were all rated positively by 80% of residents. 94% rated City services positively, and 88% rated access to public information positively. In the area of participation, 83% rated the sense of community positively.

Additionally the City asked several “custom” Dublin questions including a question on the Bridge Street District. In terms of their overall impressions, 87% of residents responded favorably, compared to 84% in 2015. The number of people who responded very favorable increased by 16%, indicating that people who thought they would like it (somewhat favorable) shifted their opinion to very favorable once it was built.

For more results, view the reports below.