An open house reception was held Sept. 29 for Dublin City Manager Dana McDaniel, who announced his intention to retire after more than three decades of public service. This farewell video was presented at the reception.

Link Ahead Podcast: Dublin city government, model democracy, military precision and ‘not a goodbye’
If Dublin’s outgoing City Manager, Dana McDaniel, had ever taken up juggling, he’d likely become a quick master. In the last 30 years, not only did he climb the ranks to lead our city but also climbed to the highest levels of the Ohio National Guard, served abroad in wartime and, along with his wife, raised two daughters too. Dana talks with Bruce and Lindsay about how he managed those responsibilities plus his definitions of leadership, model democracy and public service. It’s an episode to leave you both inspired by and appreciative of Dana’s service to our great country and our great city. This is not a goodbye. It’s a ‘Thanks, Dana! We’ll see you again soon.’ 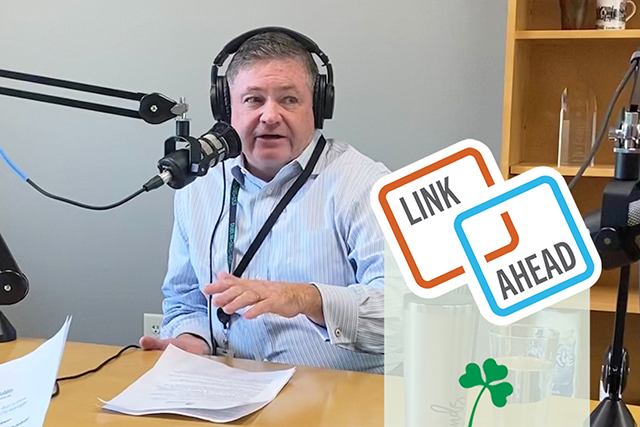 McDaniel served with the City of Dublin during a time of rapid growth and expansion. As management assistant to the city manager, Dana served as staff to the Washington Township – City of Dublin Merger Commission. As the City’s first director of service, he led the establishment of a service department that was one of only nine in North America to be accredited by the American Public Works Association.

McDaniel was instrumental in the development of Dublink, Dublin’s state-of-the-art broadband fiber-optic network. He is co-founder of the Central Ohio Research Network and helped create the Dublin Entrepreneurial Center, which currently houses more than 100 start-up companies. McDaniel oversaw the expansion of economic development programming resulting in the attraction, retention, and expansion of more than 14,000 jobs.

In 2018, McDaniel was recognized by the Asian-American Commerce Group as the Government Leader of the Year for his efforts in increasing the visibility of Asian-Americans. McDaniel also received the 2018 C-Suite award from Columbus Business First as one of the most admired executives in Columbus in the category of institutions. This award acknowledged McDaniel among the region’s most-accomplished business leaders, inspiring and encouraging others in the community with his integrity and excellence.

In 2016, he was recognized by the Ohio State University Alumni Association for Outstanding Public Service. Five years earlier, he was awarded the Outstanding Alumnus Award from The Ohio State University John Glenn School of Public Affairs. In 2013, McDaniel was honored with a lifetime achievement award by the Intelligent Community Forum. The Dublin Chamber of Commerce recognized him with its President’s Award in 2014 for his dedication to the Dublin Chamber and its business community.

McDaniel has served as Dublin’s City Manager for seven years. During that time the City was recognized with dozens of awards and recognitions, including Best Small City in Ohio, Best Suburb to do Business, Outstanding Achievement in Financial Reporting, Ohio EPA Award for Environmental Excellence and numerous top fleet/green fleet awards. The City obtained and retained accreditations in Police, Public Works, Recreation and Economic Development. During his tenure as City Manager, several new economic development projects were advanced, including Bridge Park, expansions and preservations in the Historic District, Ohio University Dublin Campus, The Ohio State University Wexner Medical Center, Quantum Health, and many others. The City set the conditions for future economic growth with a series of re-zonings to make Dublin’s legacy office parks more competitive. The City made improvements to its own facilities to include a new North Pool, Riverside Crossing Park and City Hall/Council Chambers. Numerous public infrastructure projects were initiated, including the 270/33 interchange, a collaborative project with the Ohio Department of Transportation (ODOT) that was completed in 2017, and the 33/161/Post Road interchange, a joint effort with ODOT and Union County that is scheduled for completion in 2025.

McDaniel, along with a terrific team of dedicated City employees and supportive City Council, continued to provide uninterrupted services, capital projects, continued economic expansion, and an environment in which Dublin residents and businesses could thrive, despite the challenges of COVID-19. The most recent Community Attitude Survey earned the City an overall approval rating of 99%. During McDaniel’s tenure, City Council adopted a Strategic Framework providing a path forward in which the City of Dublin will be a global city of choice by being the most sustainable, most connected, and most resilient city.

He retired from the Ohio National Guard following a 35-year distinguished career. McDaniel enlisted as a Private/E1, and retired at the rank of Brigadier General. McDaniel served in numerous command and staff positions from platoon to division levels. He is an Iraq war veteran.

He and his wife Lisa Patt-McDaniel are Dublin residents and the parents of two daughters, Caitlyn and Colleen.