Dublin City Council passed a resolution at their Monday, November 18 meeting opposing Substitute House Bill 5. The City of Dublin supports and applauds efforts to bring uniformity and simplicity to Ohio municipal tax law, but in a revenue-neutral matter.

The resolution is in response to passage of the bill by the Ohio House of Representatives on Wednesday, November 13. The bill is now expected to go to the Ohio Senate.

Substitute House Bill 5 will impact our ability to provide basic services. The municipal income tax is a vital source of revenue that enables the City of Dublin to provide essential municipal services and offer a quality of life that residents and businesses expect and demand. Any forced reduction in municipal tax revenue will have a negative impact on our community, creating an environment detrimental to retaining and attracting businesses to Dublin and to the State of Ohio.

This is the third hit city budgets have taken from state cutbacks in just three years. We have worked aggressively to “do more with less” as the state has cut back its support, but Substitute House Bill 5 pushes this too far. Along with other cities, we may have no choice but to seek tax increases. And tax increases are very difficult to pass.

Let your voices be heard. Contact your elected officials:

Cities, and at least 41 representatives from both sides of the aisle, oppose the bill, largely because some provisions will lead to a loss of local tax revenue — on top of recent state cuts and the loss of the estate tax.

The bill is expected to go to the Senate. Sen. Jim Hughes serves the residents of Dublin.

In the meantime, Dublin City Council is expected to pass a resolution opposing House Bill 5 at its Monday, November 18 regularly scheduled meeting.

Let your voices be heard. Contact your elected officials:

Sub.HB 5 is a municipal tax bill co-sponsored by Ohio House Majority Whip Cheryl Grossman (R-Grove City) and Rep. Mike Henne (R-Vandalia). It was introduced to the Ohio General Assembly with the proposed purpose of promoting uniformity and simplicity within Ohio’s municipal income tax structure while maintaining a degree of revenue neutrality for all municipalities involved.

The City of Dublin, along with municipalities from throughout the State of Ohio, support and applaud efforts to bring uniformity and simplicity to Ohio municipal tax law, but in a revenue-neutral matter.

The bill as presented falls short of its claimed objectives. If passed, Sub. HB5 5would introduce legislation detrimental to the financial stability of Ohio’s municipalities.

The House Ways and Means Committee voted on November 6, 2013 to pass Sub. HB5 out of committee, over continued concerns from municipalities. Sub. HB5 substitute bill will now move to the House floor for a vote. The vote is scheduled for Wednesday, November 13 @ 1 p.m.

Click here for more information on where Sub. HB5 can go next on its path towards the Governor’s signature.

To keep current on this issue visit: www.ohmuniadvocates.com

Ohio United is an advocate branch currently opposing Sub. HB5, a bill that would drastically alter the way municipal taxes are collected in Ohio.

Here is what our residents need to know:

The Columbus Dispatch
With a potential vote this week, some legislators from Franklin County are struggling to decide whether to support a complex bill designed to simplify Ohio’s system of municipal income taxes.
http://www.dispatch.com/content/stories/local/2013/11/12/municipal-tax-bill-not-clear-cut-for-legislators.html

The Columbus Dispatch
The Ohio House is set to approve sweeping business-backed changes in municipal income-tax rules this week, even though leaders of Ohio cities decry the bill as cutting further into their finances.
http://www.dispatch.com/content/stories/local/2013/11/11/changing-municipal-tax-law-riles-cities.html

The Columbus Dispatch
Ohio’s municipal-income tax system is like death by a thousand paper cuts for taxpayers. House Bill 5 will help to fix this barrier to economic development and make Ohio a better place to do business.
http://www.dispatch.com/content/stories/editorials/2013/11/08/1-mishmash-of-city-taxes-hurts-economy.html

Bill aimed at how cities collect income taxes gets makeover

The Columbus Dispatch
A bill designed to bring uniformity to Ohio’s complex system of municipal income taxes got a makeover that Ohio cities say is better but still reduces their revenue.
http://www.dispatch.com/content/stories/local/2013/10/23/Municipal-tax-reform.html

This Week News
Bexley and other municipalities around the state could be affected by pending legislation that is designed to streamline Ohio’s complex system of municipal income taxes, District 18 state Rep. Michael Stinziano (D-Columbus) said during a Nov. 7 town hall meeting at the Bexley Public Library.
http://www.thisweeknews.com/content/stories/bexley/news/2013/11/11/district-18-town-hall-house-bill-5-vote-interesting-one-for-leaders.html

The Columbus Dispatch
Years will pass before raindrops wear down a rock. But they will, just as the General Assembly — both parties — slowly wears down Ohio cities’ home rule.
http://www.dispatch.com/content/stories/editorials/2013/10/27/1-general-assembly-chipping-away-at-cities-home-rule.html 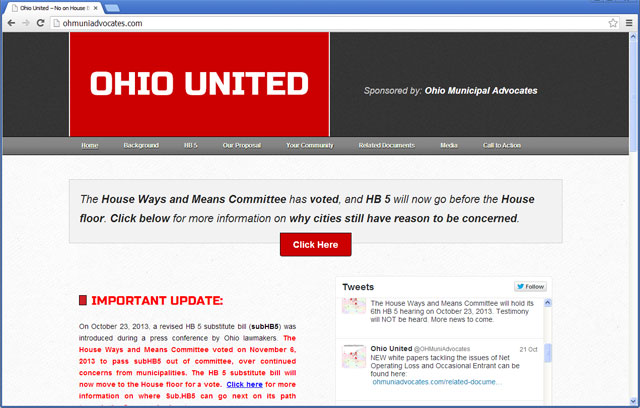 As Central Ohio community leaders, we are writing to express our strong opposition to Substitute HB5 in its present form. The original intent behind HB5 was to improve Ohio’s business climate by simplifying the state’s municipal income tax system. However, the substitute version of the bill contains a myriad of tax loopholes and exemptions that are designed to help select interest groups rather than the overall business community.

This is done at a great expense to our local governments. HB5, if enacted, will erode the major revenue source of Central Ohio’s local governments. HB5 will result in significant revenue loss and reduction in the city’s municipal income tax revenue. Although the needs of each municipality are slightly different, we believe that it is possible to create a bill that achieves uniformity.

As HB5 moves to the floor, we encourage you to speak with the Mid-Ohio Regional Planning Commission and Central Ohio government leaders to further discuss this bill.

We urge you to oppose HB5. 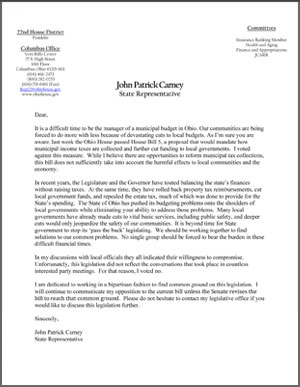 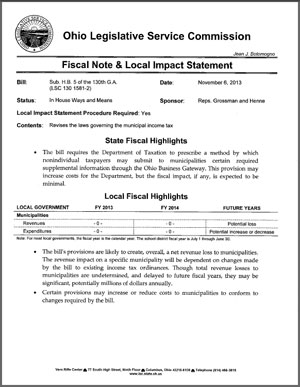 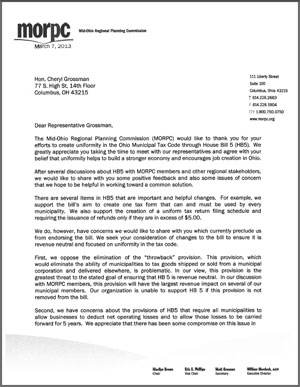 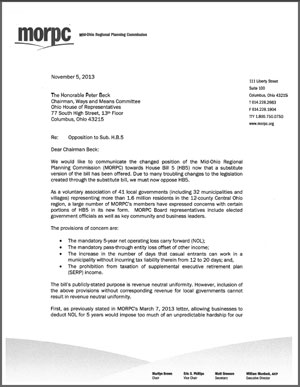 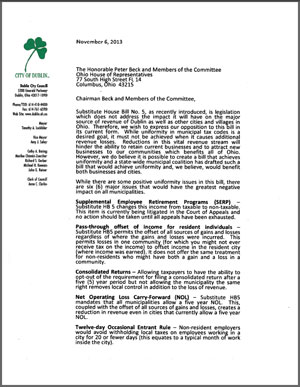