Where to find Native American History in Dublin 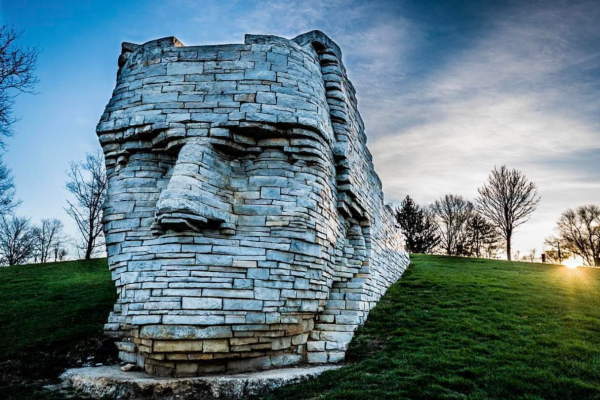 View the original post by the Dublin Convention & Visitors Bureau

Did you know Dublin was once frequented by several Native American tribes? Back in the 1800s, Dublin was known for rich land, natural spring water and access to the Scioto River, a natural transportation route for their civilizations.

Read on to learn more about some notable sites honoring our Native American history and how you can experience them on your next trip to Dublin:

One of Dublin’s most commemorated Native Americans was Wyandot Chief Leatherlips or Shateyoranyah. Chief Leatherlips’ name referred to the strength of his word – some even said his “word was as true as Gospel.”

His memory lives on in Scioto Park where you can find a huge commemorative public art piece in his honor. Next time you’re in the area, make sure to stop by and snap a photo!

Some believe Chief Leatherlips has something to do with the weather forecast during The Memorial Tournamenteach year. The “Curse of Chief Leatherlips” legend was so widely believed that Barbara Nicklaus herself—wife of famed golfer Jack Nicklaus—once visited his monument to make a peace offering. Read more here.

Ancient history comes to life in Dublin at Ferris-Wright Park. Uncover the lands that were home to the indigenous peoples of the Hopewell era thousands of years ago. This park boasts three earthworks and five burial mounds, all in significant shapes that were carefully constructed to honor their traditions. Also at Ferris-Wright Park is a family farm and homestead dating back to the 1800s.

Not only is Indian Run Falls an exquisite waterfall formation, it also holds historic significance. Indian Run Falls is named for the role it played as a natural resource and campsite of the Wyandot Tribe. The falls offered a safe site for the tribe to rest while they hunted before packing up and heading north to their permanent location.

This Native American-inspired piece takes inspiration from the Coat of Arms of Polish immigrant, Thaddeus Kosciuszko. Kosciuszko was revered for his service as a military engineer in the Revolutionary War. This public art piece resembles the headdress of Native American, Kihue (more commonly known as Bill Moose), who was the last of the Wyandot American Indian Tribe to have lived in Ohio.

Next time you’re in Dublin, visit Feather Point at Thaddeus Kosciuszko Park and enjoy 1.7 miles of trails, a fishing pond and much more!

The history of Dublin reaches back to before the pioneers and Native Americans were among the first to travel here. Will you follow in their footsteps?

About the City of Dublin

Dublin is a city of more than 47,000 residents located just northwest of Columbus, Ohio. It offers residents and corporate citizens responsive services, attractive housing, superior public education, direct regional highway access, abundant park space, thoughtful and strategic planning, innovative ideas and technology and a dynamic community life. Dublin is consistently ranked one of the safest cities in the nation and in 2015 was named one of America’s Top 20 Creative Class Cities. It is home to more than 20 corporate headquarters, an entrepreneurial center, 4,300+ businesses, world-class events and the urban, walkable Bridge Street District. Read more.