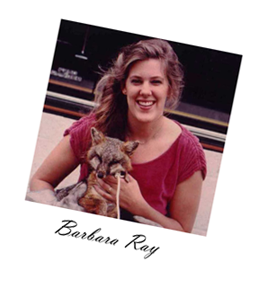 Barbara Ray (B.S. Agriculture/Animal Science, 1986, Ohio State University) is Dublin’s Nature Education Coordinator. Prior to Dublin, Barbara had been the Director of Education for the Ohio Wildlife Center since 2001. She was a founding member of the wildlife center where she had volunteered since 1981, and began the formal wildlife and nature education programs in 1982 with a red-tailed hawk named “Liberty.”

She is an Adjunct Professor at Otterbein University and formed the captive wildlife management and environmental interpretive curriculum for the sophomore year of the Zoo and Conservation Science 4 year degree program. She has been actively involved in the development and implementation of resident and day camp programs since 1982, (Maumee Valley GS Council).

She developed programs, managed the permanent animal collections and trained trainers from 1989-2001 as the Outreach/Interpretive Coordinator at the Columbus Zoo and Aquarium. Both past and current responsibilities include designing interactive wildlife and nature programs in safe and fun environments for children and their families, to provide residents the opportunity to experience the natural world first hand and become proactive citizens in learning to coexist with and preserve diverse wildlife in their communities.

She is an artist in her spare time and trains and rehabilitates troubled canines and equines (a polite way to say that it is really we, the people, who are being “trained!”) and is currently owned and mentored by several 4-legged animals and some with far fewer!