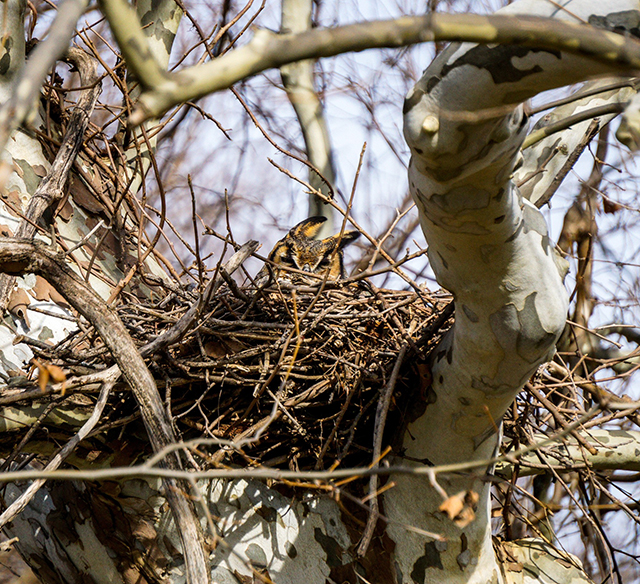 Great-horned owls rarely build their own nest. Since they nest well before hawks, they often come into an area and take up residence in a hawk’s nest from the previous year. Pictured is a pair of owls at Coffman Park that had taken the nest from a resident pair of red-shouldered hawks, who successfully reared two chicks out of the nest last summer.

The hawks have remained in the area, and will be looking for a new site to begin building their new nest. Their old nest, now being used by the owls, was actually pretty exposed for the red-shouldered species. Normally they build a cone-shaped nest deep in the fork of a large tree at heights of 20’ or more. Their first nest built last year blew down in a storm, then they built this quick replacement in a London Plane tree that is only about 15’ from the ground. Not your typical hawks nest!

Since this nest is near lights and a lot of human traffic, and great-horned owls prey on hawk chicks and even adult hawks in a nest, hawks prefer to nest close to humans which deters the owls to some extent.

Dublin owls will be incubating eggs for about 30 days starting in late January/early February. The chicks should hatch in early March and will be ready to leave the nest about 12 weeks later. When they do climb out of the nest, they will not be able to fly very well, and will spend about a week jumping around on low branches or even the ground. We can help these birds and their parents by giving them a wide berth, observing only from a distance, and keeping our pets on leashes as required by City ordinance.

Listen for the raspy whines and peeps of young owls this spring, and we will definitely hear the more shrill whistles of the hawks if they nest in Coffman Park again, as they are very vocal all spring and summer long.