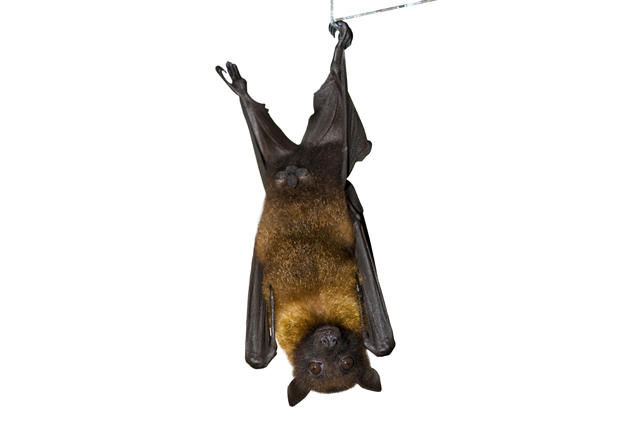 From the ODNR Species Guide

There are 11 species of bats that inhabit Ohio. All of these bats are insectivores, meaning they eat insects. They are the only major predator of night-flying insects, and save billions of dollars a year for agriculture on pest control. Bats are usually able to exist near human homes without making their presence known. However, with decreasing amounts of habitat available for bats (e.g., trees being cleared), bats may find their way into man-made structures.

Even those who are not fond of bats, often understand the critical role they play in the environment and public health with their bug-control capabilities. The White-nose Syndrome (a disease of bats) that has killed many bats created a noticeable upsurge of insects in our communities the past few years.

Bats exhibit a constant fluctation of body temperature year around. In short, if a bat is not moving, its body temperature begins to drop immediately and will graduate closer to the air temp around it the longer it is inactive. This kind of “torpor,” (temporary inactivity) allows them to conserve a lot of energy. As soon as the bat begins to move, stretching a wing, flexing legs, the body temperature rises.

During winter, microchiroptera (fruit bats) will go into an extended torpor we call hibernation. Like most deep hibernators (where body temperature drops very low and metabolism nearly ceases for extended periods), they must wake up periodically to sleep. So several times during the hibernation period, the animal will rouse, warm up, shiver to bring the body to full temperature, then go back to sleep.

Every rousal uses up a great deal of the stored body fat. A 14g bat may weight 25g going into hibernation, and wake up in spring at 12g. This is why it is important to not disturb or wake them during their sleep. The brain seems to need a phase of wakefulness periodically in order to go back into the deep sleep where there is little brain activity. They can only afford to wake up on their own a few times during winter, any additional wake-age could prove fatal as they can become dehydrated and too underweight to make it through the rest of winter.

Studies observing fruit bats in captivity show their body temperatures also fluctuate quite a bit (33-37 C), but to keep the temp from dropping too low, they begin to shiver or move about by twitching limbs or wings, and they never fully sleep for long periods at night. In short, our insectivorous, hibernating Ohio bats shiver to wake up their bodies and the tropical fruit bats shiver to keep from becoming too cold so they can sleep a little bit.

Insectivorous bats need temperatures below about 40 degrees to remain asleep in their hibernating state. Some bats migrate north in order to find cool enough hibernaculums. Some bats have figured out that places in human dwellings (like basements) provide these colder and more stable temperatures.

Bats in your Building

Bats can gain access to buildings through cracks, holes, vents, and uncapped chimneys. To keep them out, seal cracks and crevices and screen off vents and chimneys. Bats can crawl through cracks as small as 1/3 inch. The best time to seal the entry/exit points is in August when young bats are learning to fly.

Never touch or pick up a bat. If a bat has gained access to your home open a window to allow it to escape or trap the bat against a wall with a large can, then slide a piece of thin cardboard between the wall and the can opening to capture it.

If you notice a bat moving about in winter or one has gotten into human living space or is flying about, contact a wildlife rehabilitator. Such a bat will need overwintering help where he or she can be properly housed, fed and watered. In cool, stable areas such as those attic spaces, they may remain hibernating just fine until spring.

You can help a bat then by keeping an eye on the warming weather in March and seeing if the bat is moving about and/or flying and able to exit the area he is in. On warmer nights (above 50) the bat may decide to fly and find some insects, usually “winter-active moths” at this point.

Attic bats probably are familiar with where to enter and exit. A bat in a garage may or may not have that access, so if one is flying about he could be burning valuable energy with no way to hydrate and replenish. Call a rehabilitator for assistance and advice. During maintained warmer weather, opening the garage and releasing the bat would make the most sense. If it is an isolated temperature and will be getting cold again, the bat cannot be left outside.