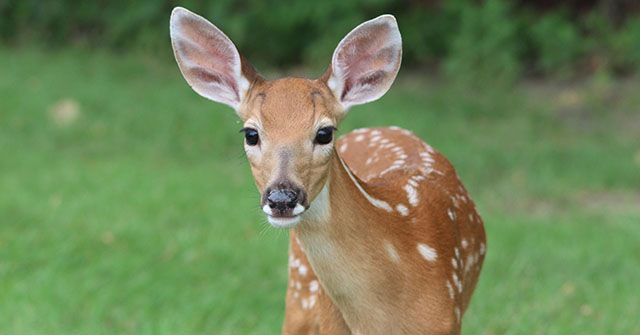 The City of Dublin has received recent reports of dogs being charged by a female deer in Indian Run Meadows. The deer is guarding her fawn and views dogs as a threat.

We recommend that dog owners avoid walking your dog through Indian Run Meadows for a 10-14 days. A doe will defend her fawn by charging at a dog and trying to strike with their front hooves. Deer will display behaviors including staring, snorting and walking stiffly as a warning to a dog/person.

It is critical to walk dogs on leashes in parks and on paths as fawns could be anywhere. If a you are walking your dog and notice a doe coming toward or focusing their gaze while snorting, you should back up calmly and stay between the doe and the dog while waving and shouting at the deer. This demonstrates a sign of dominance, which makes most female deer retreat. Deer may bed fawns anywhere in the City, but park walkers near any woods or meadow should be especially alert.

It is common for does to move their fawns, so the City of Dublin’s Nature Education Coordinator Barbara Ray will monitor the doe to see if she will move that fawn away from the area in a day or two.

Whitetail deer fawns in Ohio are usually born between April and July. While you might feel compelled to “fawn” over these adorable creatures, you might have to look out for their parents.

Deer with fawns less than three weeks old will defend their vulnerable babies, especially around dogs. Does often bed their fawns near buildings and houses for safety, yet they have a strong instinct to ward off predators. Domestic dogs are often perceived as genuine predators as much as coyotes.

With the last fawns of the season on the ground now, we have about a month more of taking special care to be aware of the deer in our neighborhoods.

How to tell if fawns are nearby:

A group of deer together is generally not a problem. A single deer by itself is a sign it may have a fawn hidden nearby. Does often will not allow other deer near their fawns the first couple weeks. Once the fawns are moving about with their moms, the defensive behavior goes away, and the deer simply move out of the way.

How to tell if a doe is being defensive, and what to do:

What does defensive behavior look like? A doe facing you boldly, failing to retreat if you move or shout or make yourself look big, or moving toward you (usually their focus is on a dog) – these are all cues to retreat to safety.

If you spot a doe standing with a fawn, give them a wide berth. Oftentimes backing away and moving out of the area is safest, rather than trying to go around. Be especially aware if walking a dog or taking dogs out in the yard.

Create space between yourself and the deer. Failure to do so can lead the deer to actually pursue the threat. If they make contact, they may kick or they may strike by rearing up with front hooves and hitting their offender.

In parks, stay on paths and be aware of places to retreat if a deer were to approach. Back up while waving and shouting at the deer and retreat from the area. Do not turn your back on the deer and do your best to keep dogs from barking or lunging toward the deer. Move behind a building or vehicle, or into a building until the deer moves on.

How to tell if a fawn is orphaned:

If a fawn gets up and moves away the mother will find it by listening for the grunting sounds they make back and forth to communicate. A fawn that is truly orphaned with no doe attending it will make constant calls that sound a lot like a sheep “baa” and may be walking around as if confused or lost. If flies are flying all around a fawn it may be sick.

In these instances a fawn should be rescued. Some may need to be euthanized and some that are healthier can be fostered to another doe by wildlife rehabilitators permitted to accept fawns. Ohio Wildlife Center and Crows Hollow Wildlife Care are the two central Ohio fawn permit holders.

This time of year it is critical to walk dogs on leashes in parks and on paths as fawns are everywhere, and some does will attempt to defend a fawn if a dog seems too close to them.

When taking dogs out in the yard, be prepared to call the dog back inside quickly if a deer approaches. If approached by a doe, back away slowly and leave the area. Keep dogs from barking at the deer and pick up small dogs. Avoid that area for the 10-14 day period most fawns are bedded. After that period, fawns follow their moms around and are very mobile and the does are less stressed by predator presence.

In case of an immediate threat to a person or pet, call 911. Report encounters with deer behaving unusually to Barbara Ray, Nature Education Coordinator at 614.309.6916 or bray@dublin.oh.us. For other immediate concerns about wildlife, call the Dublin Police non-emergency number at 614.889.1112.