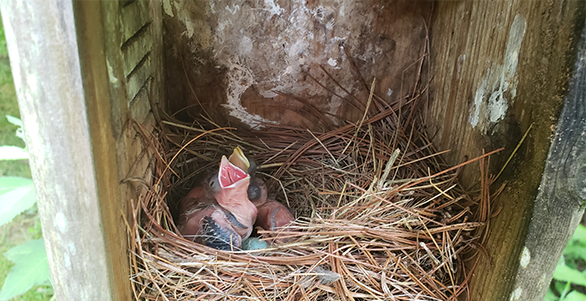 For the past 35 years, the City of Dublin has worked to provide sustainable habitats for Central Ohio’s native birds. Cavity nesters particularly face many threats, but through the efforts of volunteers and City staff creating and maintaining nest boxes, we have been able to keep bluebird, tree swallow, chickadee, kestrel, owl and prothonotary warbler numbers higher than they likely be without supplemental housing availability.

In addition to City volunteers and staff, several Dublin residents also have nest boxes on their property. But to support native species, nest boxes take a commitment to monitor, or they end up supporting invasive European sparrows who will kill the native species at the next box. Homeowners who put up nest boxes to support kestrels, screech owls or barred owls won’t have to monitor them. Those birds take care of invaders on their own!

Ways You Can Help 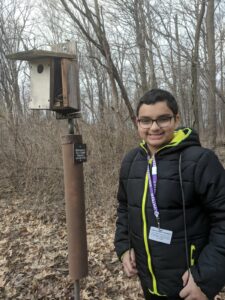 The Dublin Bluebird Monitoring volunteer team consists of 15 volunteers who monitor over 60 bird boxes in Dublin parks each birding season, which usually lasts March through July, depending on the weather.

In 2021, 95 songbirds (bluebird, wren and swallows) fledged with the help of the volunteer team monitoring and checking the boxes weekly.

If you are interested in learning more about this volunteer opportunity, please reach out to volunteer@dublin.oh.us. Training is offered and the next session is scheduled for 6 p.m. Wednesday, March 16.

Bluebirds find shelter in Dublin at a grid of six bluebird nest boxes. This bluebird trail is located in Coffman Park at 5952 Post Road. The original nine boxes were made possible by Darlene Sillick and Dublin resident Ralph Windsor. The three bluebird boxes near the creek were removed later due to their proximity to bushes and too many sparrows inhabited the boxes.

With more than 30 years of experience building bluebird boxes, Ralph built the bluebird boxes for this grid. You can visit an above ground marker near box PN6 that dedicates the grid to Ralph.

Dublin is home to a beautiful purple martin house, gifted to the City by the Pluff family in honor of resident Mike Pluff’s father who hand built the house in 1987. The house is located at the Wall Street pond. Michael generously donated this beautifully-built martin house to the City of Dublin. The Pluff family hopes the martin house serves the city and its residents with many chances to enjoy the small energetic birds that will call the nest box their home!

Chimney Swifts Nest Tower
Another cavity-nesting bird, chimney swifts also call Dublin home. One of the most reliable locations for viewing swifts is in Dublin behind Sells Middle School on U.S. 33/S.R. 161 just west of North High Street. Families and birders bring lounge chairs at dusk to wait in the fading sunlight for the swifts to begin their mostly counter-clockwise flight around the large brick chimney. This is an annual event in late summer in Dublin. The chimney tower provides critical cavity nest box habitat for hundreds of swifts. The hope is that the chimney nest tower will be around a long time and preserved for the birds.

*= Federally Listed  N= Nests in this area
Note: common species such as cardinals, bluejays, etc. are not listed as these species already utilize this section of Dublin.

Species of Concern are close to being listed as state threatened species, Species of Interest are on watch as their numbers are dwindling, reproduction may be greatly down and habitat loss can push them into a dire situation.

2020 seasonal data and latest sightings of fall/winter species noted in ().  Most warbler/flycatcher/vireo species are present in the spring and fall migrations, May-June and again September-October