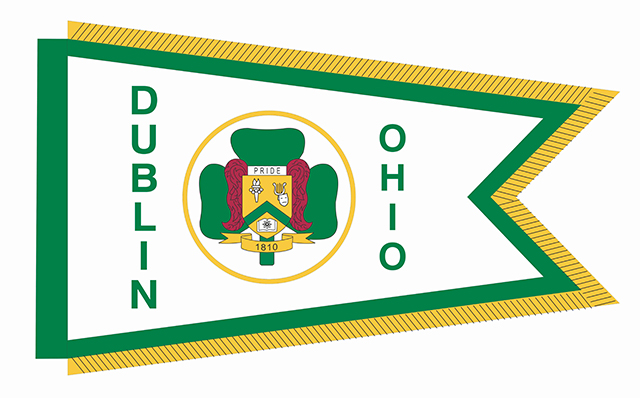 (Dublin, Ohio) – It’s been a grand old flag, but the time has come to adopt a new banner to represent the City of Dublin. At its April 9 Community Development Committee meeting, Dublin City Council announced that it would sponsor a design contest for a new flag.“We’re looking for a flag that is an enduring symbol of the City and one that will stand the test of time,” said Council Member John Reiner. “We will retire our current flag, with honors, and keep it as our historic, original flag.”

The original flag was adopted by Dublin Village Council March 21, 1977 through a contest sponsored by the Ladies Police Auxiliary. The flag was designed by Coleen, Cindy and Caroline McNemar, daughters of former Dublin Police Officer Ralph McNemar, who also served the City as a Streets & Utilities supervisor.

The deadline for submission for the new flag design is July 9, 2018. Judging will be based on vexillology (the study of flags and related emblems) standards, with Dublin City Council reserving the right for final selection. Judges will be well-versed in vexillology and heraldry.

According to the book, “Good Flag, Bad Flag,” compiled by Ted Kaye, the five basic principles of flag design are:

To keep the current contest objective, Reiner has developed a submission process that will allow the final designs to be selected anonymously. Contest entrants should place their design in one envelope, and their name and contact information in a second sealed envelope. Both envelopes should be placed in a third envelope.

The contest is open to anyone interested in submitting a design. Entries should be received no later than July 9. Submissions should be sent to Nancy Richison, Government & International Relations Manager, Dublin City Hall, 5200 Emerald Parkway, Dublin, OH, 43017, and should be marked “Dublin Flag Entry.” Original submissions will not be returned. Entries should include the flag designer’s name, age, address, phone number and email, as well as a description of the symbolism in the flag design.