Dublin Fleet Remains on Top in 2021 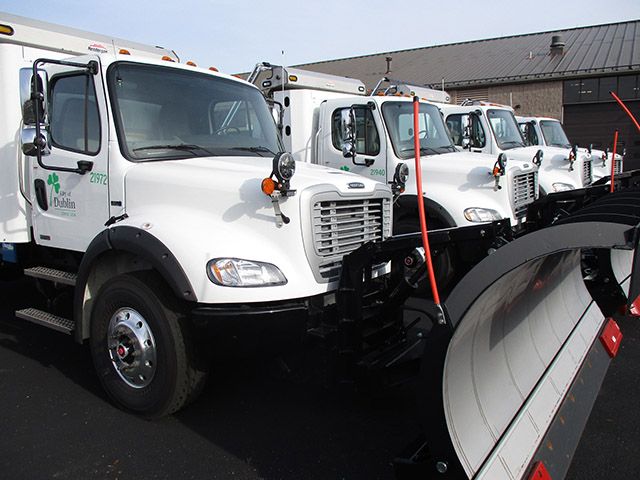 (Dublin, Ohio) — The City of Dublin’s Fleet rounded out 2021 by ranking near the top of three different fleet awards that accept entries from across the nation. The following awards include Government Fleet’s top overall leading fleet, NAFA’s Top 100 Fleet in North America and 100 Best Green Fleet Award.

Government Fleet has named The City of Dublin the #12 overall fleet in North America. The 50 Leading Fleets program recognizes the best in the industry.

Fleets are judged on leadership among staff with customers and within the community; staying efficient and competitive; overcoming challenges; and having a vision and direction for the operation.

The City of Dublin is recognized as one of the 100 Best Fleets in North America. Dublin ranked #39 this year, which is up from the City’s #41 ranking in 2020. The 100 Best Fleets program recognizes and rewards peak performing fleet operations throughout the country. The program identifies and encourages ever-increasing levels of performance improvement within the fleet industry.

Applications are judged on 12 different Criteria of Excellence including Accountability, Use of Technology and Information, Collaboration, Creativity, Celebration, Evidence of a High Trust Culture, Performance Recognition, Doing It Right the First Time, Quick Efficient Turnaround, Competitive Pricing, Staff Development and Resources Stewardship. The judging is heavily weighted on innovation and creativity in how each fleet employs these qualities in its operations.

The City of Dublin has earned the #5 ranking on this year’s Top 50 Green Fleets in North America list. This is the 10th consecutive year Dublin has ranked in the Top 50. Last year, Dublin’s fleet ranked third.

The Government Green Fleet Award is open to all Federal, State, and Local Government Fleets in North America. Fleets are evaluated based on several categories including composition; fuel & emissions; and education.To learn more about the City of Dublin’s fleet management, visit DublinOhioUSA.gov.

The Dublin Division of Facilities and Fleet Management is a Certified Fleet Management Operation that is consistently ranked among the best in the country. It has been named one of the Top 50 Leading Fleets and 100 Best Fleets in North America. The operation has also earned the Automotive Service Excellence Blue Seal Shop Certification for 12 consecutive years.