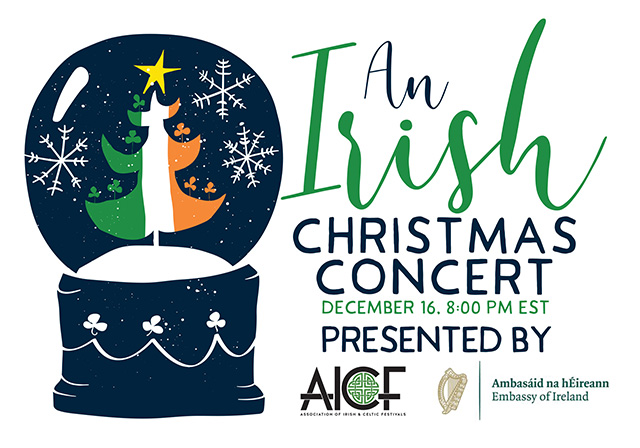 The Dublin Irish Festival is pleased to cohost An Irish Christmas Concert in conjunction with the Association of Irish and Celtic Festivals (AICF), with generous support from the Embassy of Ireland, as a way to virtually celebrate the holidays.

The AICF, composed of more than 170 Irish and Celtic festivals from across the United States and Canada, is dedicated to sharing Irish music, education, food and dance with the world to ensure that Ireland’s time-honored traditions live forever.

“We look forward to sharing the spirit of Ireland and its rich culture through the power and magic of music during this special time of year,” said Dublin Irish Festival Director Alison LeRoy.

On Wednesday, Dec. 16 at 8 p.m. EST, the AICF will showcase seven of Ireland’s best musical acts, from established performers to up-and-coming groups, to spread holiday cheer throughout the world. Audiences can watch from the comfort of their homes on Facebook or YouTube, links to the concert can be found at IrishCelticFestivals.org.

“The world’s largest annual Irish festivals aren’t in Mayo, Meath, Kilkenny or Dublin, Ireland, but in cities across the USA. These and other festivals across this continent perform an incredible service, celebrating our culture and connecting Americans with their heritage,” said the Ambassador of Ireland to the United States H.E. Daniel Mulhall. “This Christmas, as we stay apart to contain the pandemic, I’m delighted that so many of our friends have come together virtually to present this concert. As we say in Irish, ní neart go cur le chéile – we are strongest together.”

Performers for the event include:

When asked for his thoughts on this upcoming performance Shane said, “AICF and all its members have made me feel so welcome each time I’ve visited the United States. What started as a showcase appearance a few years ago has turned into a wide network of friends and supporters, and their nurturing of my fellow Irish artists and myself has introduced us to new audiences all over the USA. I am so thankful for their support now, at the most difficult time for musicians and artists in recent history. This stream will bring a lot of joy to fans of Irish culture all over the world, in particular those of us who desperately miss the festival scene!”

The stream will be produced by O’Neill Events and Marketing.

For more information about this event, or for Irish and Celtic festivals interested in joining the AICF, please visit IrishCelticFestivals.org.

For more information on the 2021 Dublin Irish Festival, visit DublinIrishFestival.org.