(Dublin, OH) – Dublin Police are asking for help in locating in one of the 18-artistically enhanced golf balls on display in Dublin. A golf ball with the Memorial Tournament presented by Nationwide Insurance logo painted on it and the ball’s stand were reported missing on Oct. 7. The ball had been on display at the corner of Dublin Road and Memorial Drive. 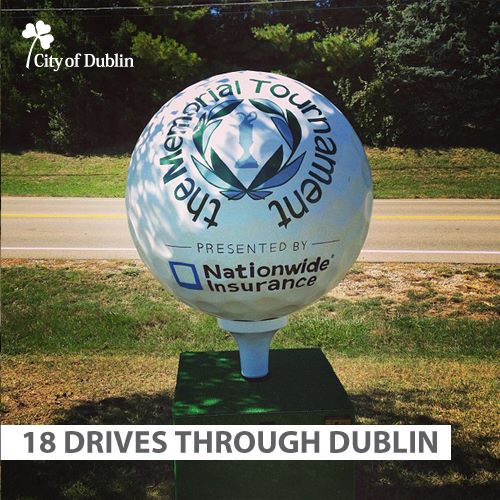 The Memorial Tournament ball was part of a temporary public art exhibit sponsored by the City of Dublin in honor of The Presidents Cup and the Memorial Tournament. The exhibit, titled 18 Drives Through Dublin, started with the sale of 18 enlarged golf balls and stands, that were sold at $1,500 apiece. Sponsors of the balls then paid artists to have the balls painted; the balls are to remain on exhibit throughout Dublin until June 2014. An estimate of the stolen Memorial Tournament golf ball after it had been painted had not been determined.

Given the value of the exhibit, the theft is a felony crime. Officials with Muirfield Village Golf Course, which sponsors the Memorial Tournament, are offering a grace period where no felony charges will be filed if the ball is returned undamaged. The thief (or thieves) have until midnight on Oct. 12 to return the ball and avoid charges.

Any information regarding the missing art, including anonymous tips, can be reported here: https://dublinohiousa.gov/dublin-police/crime-reporting-and-prevention/

Information about the golf ball art exhibit can be found at: https://dublinohiousa.gov/presidents-cup/golf-ball-community-art-campaign/