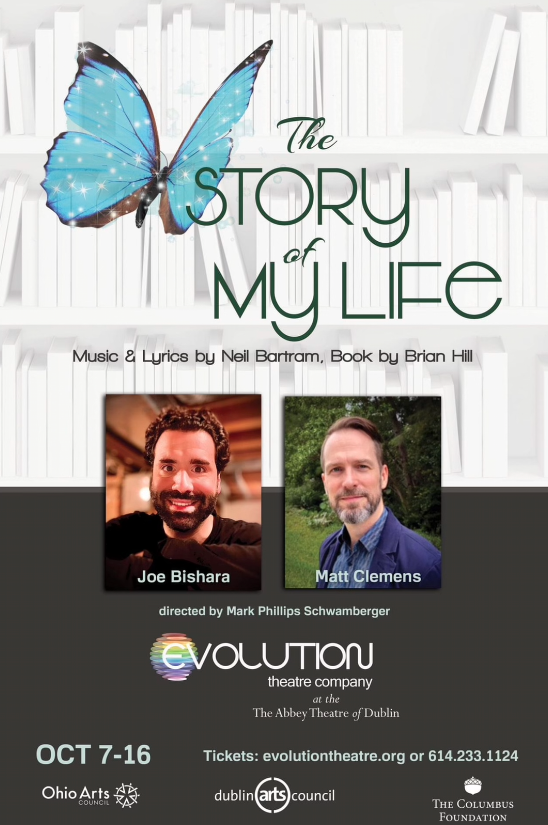 Both actors appeared in the show’s regional premiere in 2012 and are reprising their collaboration in this emotionally charged and heart-warming musical production directed by Mark Phillips Schwamberger, Managing Artistic Director of Evolution Theatre Company, now making its home at the Abbey Theater.

Especially poignant because of the shared history of these two powerhouse performers and musicians, “The Story of My Life” follows a lifelong friendship between two men, Alvin and Thomas, whose childhood bond continues throughout their adult years. The story is told through a series of exquisitely orchestrated songs in turn playful, touching and dramatic. Get your tickets now for the limited run of this MUST-SEE production.

THE STORY OF MY LIFE, starring Matt Clemens and Joe Bishara

Due to the rise in infection rates currently occurring, Evolution Theatre Company will require vaccinations for audience members, as well as performers, backstage crew and theater staff. Masks will also be required for audiences inside the theater, except while eating or drinking in designated locations.

Matt Clemens returns to Columbus after a seven year hiatus to perform with his friend, Joe Bishara, who returns to the stage after an absence of 3 years. This will be the fourth time the acclaimed actors have performed together, previously appearing in “Dirty Rotten Scoundrels,” “Chess in Concert” and “Two Men and a Piano.”

In Columbus, Ohio, Matt performed in “Follies in Concert” (Short North Stage), “Souvenir” (CATCO), “Chess in Concert” (SRO Theatre Company), “Dirty Rotten Scoundrels” (CATCO) and “Sunday in the Park with George” (Short North Stage). He also directed “Grey Gardens” and “Forever Plaid” for CATCO as well as “The Marvelous Wonderettes” and “A Grand Night for Singing” for Short North Stage. Working in theater for over 30 years as an actor, singer, conductor, pianist, music director, composer, director and writer, Matt currently writes, designs and directs shows for Celebrity Cruises, based in Miami, Florida.

Joe Bishara has collaborated on over 200 theatrical productions across the United States as an award-winning actor, director, educator and producer. In addition to his current position as Theater Supervisor for the City of Dublin, Ohio (Abbey Theater of Dublin), he is also the Founder and Managing Director of New Albany Youth Theatre and a Creative Consultant for both Broadway2LA Acting Studio and Evolution Theatre Company. Previous Theatrical stops include: CATCO (Associate Producing Director), Franklinton Preparatory Academy (Theater Instructor), The Phoenix Theatre for Children (Production Coordinator), Wayside Theatre (Assistant Artistic Director) and Act Out Productions (Associate Producer for the inaugural Columbus National Gay and Lesbian Theatre Festival). Joe is a passionate advocate for new theatrical works. He is the creator of the Abbey Theater of Dublin’s Virtual Theatre Project, co-founder of the Otterbein Playwrights Collective and served for six years as the Program Coordinator for the Greater Columbus Arts Council (GCAC) Equity Association (AEA), a member of the Musical Theatre Educators’ Alliance (MTEA) and an associate member of the Stage Directors and Choreographer Society (SDC).

The Dublin Arts Council, the Greater Columbus Arts Council and the Ohio Arts Council partially funded this production of “The Story of My Life” through community arts grants to encourage community engagement, cultivate creativity and foster life-long learning through the arts.

We seek to draw audience members into their own experience of theater, one that will be entertaining, educational and rewarding.

Evolution Theatre Company produces small scale, actor-centered plays depicting the comedy and tragedy of the human condition that educate, enlighten and entertain. This is accomplished by producing works of artistic and social significance with professional expertise and creative passion. In so doing we have developed an audience which supports such work and gives us opportunities to discover and develop local talent, and to establish an alternative professional theater in Columbus, OH.