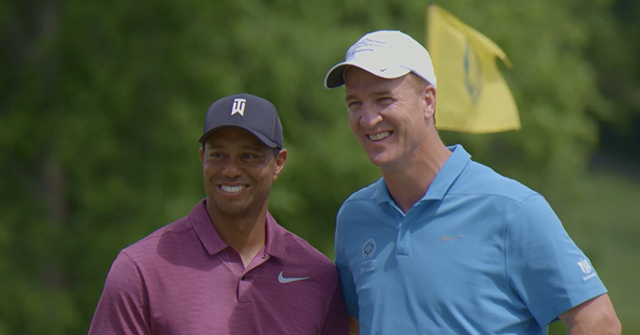 Woods to be paired with special Nationwide guest Peyton Manning in the Tournament’s official pro-am, the Nationwide Invitational at the Memorial

Woods, 43, will be making his 17th appearance in the prestigious invitational Tournament hosted by golf legend Jack Nicklaus. His scoring average of 70.29 ranks No. 3 at the Memorial, and he is No. 1 in total earnings with $5,136,605. The Jupiter, Fla., resident has recorded victories in two of his last six starts at Muirfield Village Golf Club, most recently in 2012 when his incredible shot on the 70th hole, a chip-in birdie at the par-3 16th hole, vaulted him to his 73rd PGA TOUR victory, which tied the Golden Bear on the all-time list. Woods has since increased his TOUR win total to 81, second all-time behind the 1984 Memorial Tournament Honoree Sam Snead, who recorded 82 victories. A sixth victory at the Memorial Tournament next week would tie Woods with the legendary Snead.

An 11-time PGA TOUR Player of the Year, 15-time major championship winner and two-time FedExCup champion, Woods returned to competition last year, after undergoing spinal fusion surgery in 2017. He made his first official TOUR start of the 2017-18 season at the 2018 Farmers Insurance Open and made his first cut on TOUR in two years, en route to a T-23 finish. Woods capped off his comeback campaign with a stellar triumph at the 2018 TOUR Championship for his first title since 2013. He has played in seven events during the 2018-2019 season and has recorded three top-10s, including a historic fifth Green Jacket at the Masters Tournament last month. With the victory, Woods became the second-oldest winner at Augusta National behind Jack Nicklaus (1986/46 years, 2 months, 23 days) and added the Masters to a list of seven PGA TOUR events, including the Memorial, at which he has collected five or more victories.

Fowler, 30, has been one of the most popular players on the PGA TOUR since turning professional in 2009. He has played on four U.S. Ryder Cup teams (2010, 2014, 2016, 2018) and two U.S. Presidents Cup teams (2015, 2017) and has posted five PGA TOUR victories, his first in 2012 at the Wells Fargo Championship and his latest coming this year at the Waste Management Phoenix Open. In 2014, Fowler finished inside the top-5 in all four major championships, tying for second at the U.S. Open and Open Championship. The 2010 PGA TOUR Rookie of the Year has recorded top-12 finishes at The Masters Tournament five of the past six years, including a T-9 effort this year. A resident of Jupiter, Fla., Fowler has posted five top-10 finishes in 12 starts this season and is ranked No. 10 in the world and No. 7 in FedExCup points. This year will mark his 10th Memorial Tournament start. He has finished second on two occasions, his first appearance in 2010 and again in 2017. Last year he grabbed his third top-10 at Muirfield Village Golf Club with a T-8 outing. His career Tournament earnings total $1,751,364, and his scoring average is 71.

For patrons attending the Memorial on Wednesday, Woods will be paired with special Nationwide guest Peyton Manning during the Tournament’s official Pro-Am, the Nationwide Invitational at the Memorial. In addition to Woods and Manning, the Pro-Am will feature top players from the Tournament’s field of competitors, as well as NFL royalty Jason Taylor and Kyle Rudolph. Manning and Taylor are former winners of the Walter Payton NFL Man of the Year (WPMOY) Award and Rudolph was a 2018 nominee of the esteemed award. Nationwide, which has sponsored the Memorial since 2011, is also the presenting sponsor of the Walter Payton NFL Man of the Year Award, which honors a player’s work in the community. Manning, the two-time Super Bowl champion, will play in the Nationwide Invitational for the fourth straight year. Taylor and Rudolph will make their debuts. Also making their first appearance in the Tournament’s official pro-am as guests of Nationwide are Indy Car Series star and Columbus native Graham Rahal and former Ohio State head football coach Urban Meyer. These sports celebrities will participate in the Pro-Am for the enjoyment of Tournament patrons and to highlight Wednesday’s Nationwide Children’s Hospital Patient Champion Program that shines a light on the great work being done at Nationwide Children’s. The Pro-Am begins at 7 a.m. EDT.

To purchase badges for the 2019 Memorial Tournament presented by Nationwide, the public may call the Tournament Ticket Office 9 a.m.-5 p.m. weekdays at 877-MT BADGE (877-682-2343) or visit www.memorialbadges.com to purchase badges. Kids 18 and under can attend the Tournament for free with a ticketed adult. Daily practice round tickets for Monday, Tuesday and Wednesday are also available. The cost is $35 and they are valid for all three practice-round days.

About the Memorial Tournament presented by Nationwide

The Memorial Tournament presented by Nationwide is held annually at Muirfield Village Golf Club in Dublin, Ohio, a suburb of Columbus. The Tournament, founded and hosted by Jack Nicklaus, is conducted each year with three goals in mind: to honor the memory of individuals living and deceased who have distinguished themselves in the game of golf; to showcase the world’s best golfers competing on one of the most challenging venues in the world for the enjoyment of spectators; and to benefit many Greater Columbus Charities in alliance with the Nicklaus Children’s Healthcare Foundation, Nationwide Children’s Hospital and numerous other local organizations. For more information, visit www.thememorialtournament.com or call 614-889-6700.

Nationwide, a Fortune 100 company based in Columbus, Ohio, is one of the largest and strongest diversified insurance and financial services organizations in the United States. Nationwide is rated A+ by both A.M. Best and Standard & Poor’s. An industry leader in driving customer-focused innovation, Nationwide provides a full range of insurance and financial services products including auto, business, homeowners, farm and life insurance; public and private sector retirement plans, annuities and mutual funds; excess & surplus, specialty and surety; pet, motorcycle and boat insurance. For more information, visit www.nationwide.com. Follow us on Facebook and Twitter.

Nationwide, Nationwide is on your side and the Nationwide N and Eagle are service marks of Nationwide Mutual Insurance Company.