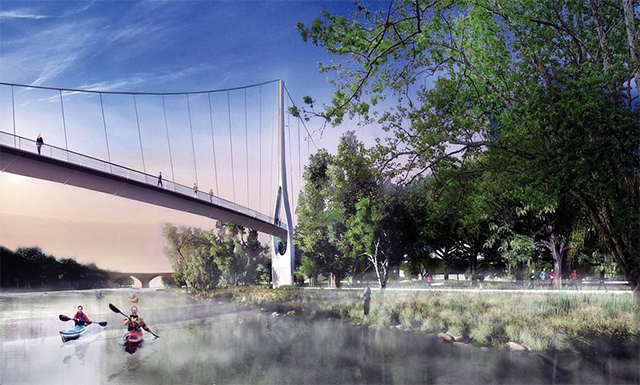 (Dublin, OH) City Council confirmed the name of Dublin’s iconic new park along Riverside Drive at their April 10 meeting. Based on input from the community and the Community Advisory Services Commission, the park has been named Riverside Crossing Park.

“The word `crossing’ emphasizes activity, the Scioto River, the act of crossing the river, and the passing of people over the new pedestrian-bicycle bridge,” said Matt Earman, Director of Parks and Recreation in a memo to Council. “It draws attention to the scale of the park, encompassing both sides of the river.”

In July 2016, the City of Dublin asked members of the community to help “Dub the Park” by submitting their best name ideas online, in person or using social media. The City received over 200 submissions.

The City’s Community Services Advisory Committee narrowed the list and made a formal recommendation to Dublin City Council. Riverside Crossing Park is the result of a combination of submissions.

Riverside Crossing Park will connect Historic Dublin and the heart of the Bridge Street District, linking nature with urban amenities for the entire community to enjoy. Site prep for the pedestrian-bicycle bridge has begun. Construction will begin on the west plaza later this year, followed by the east plaza in early 2018. 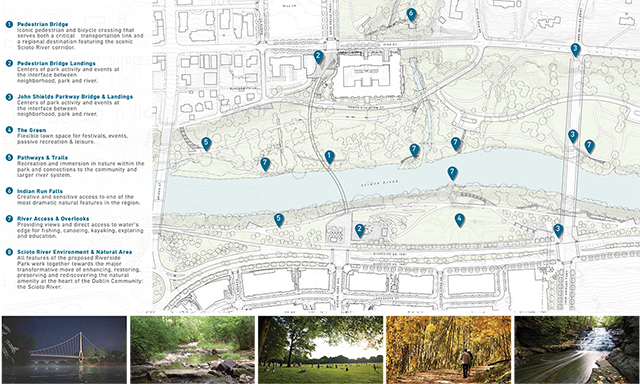 The Scioto Riverside Park Master Plan outlines a transformational vision for one of Dublin’s most important civic and natural spaces, which will connect Historic Dublin and the heart of the Bridge Street District.

Riverside Crossing Park will be part of a broader system of nearby parks and local recreational systems, linking to these assets through extensive bicycle/pedestrian facilities, canoe/kayak access points, and scenic natural connections. The west side of the park is envisioned as a more naturalized area with connections to the Indian Run greenway, water access and trail systems. The east side of the park is elevated outside of the floodplain and will feature areas for public gatherings and cultural events, pavilion building, rock climbing, planting beds and scenic river overlooks.

The two sides of the park will be linked by a pedestrian-bicycle bridge, with public plazas providing access to restaurants, shops, a new library, and the broader mix of destinations east and west. For more information view the Scioto Riverside Park Master Plan at BridgeStreet.DublinOhioUSA.gov.