Throughout the eastern U.S. and several states in the southwest, fledgling bluejay, grackle, starling and a few other species are found afflicted by a mysterious neurological illness that causes crusted-over eyes, blindness and even death.

Unfortunately, rescued birds that were taken to rehab have not survived. Rehabbers have had to make the difficult decision to humanely euthanize those dying birds after using isolation and quarantine protocols to protect the other birds in their care. Several of the sick birds are being tested at several diagnostic labs to learn more about what is causing the illness and fledgling mortality.

The City of Dublin has noticed some inquiries about birds in the surrounding area with these symptoms and signs of illness. We are asking that residents take down bird feeders as well as empty and bleach bird baths for 7 to 10 days to prevent congregation of infected and non-infected birds.

Please use the following information to do your part in helping to reduce the spread of this illness and to help any afflicted birds.

Read this article from ThisWeekNews.

The OWC has admitted songbirds with eye issues and are working closely with the Ohio Division of Wildlife and USGS National Wildlife Health Center to help determine what might be causing local birds to become sick.

Here are some ways you can help: 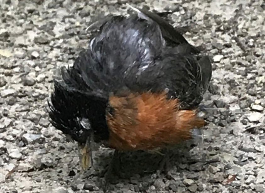 School of Environment and Natural Resources

What is Going on with the Birds?
Mysterious Illness Affecting Ohio Birds

Recently, there have been reports of ill or dying birds found around Ohio and in nearby states. These birds often have swollen eyes, discharge from their eyes that may appear crusted, or a lack of clarity to the eyes. Affected birds may also exhibit neurological signs, for example their head may hang to one side then flop to the other side.

In late May of this year, wildlife biologists in Washington D.C., Virginia, Maryland, and West Virginia began received reports of sick and dying birds. Since then, reports have surfaced in additional states, including Ohio.

Which birds are being impacted?

The illness appears to affect multiple species of birds. In Ohio, primary bird species affected include blue jays, common grackles, house sparrows, European starlings, and American robins. Other common backyard birds may also be affected. Currently, no reports exist of other animals being impacted by this illness or its symptoms.

American robin displaying symptoms. This picture was taken by Kristi Anderson and posted to the Preservation Parks of Delaware County Facebook page on June 15, 2021.

What is causing the illness?

Currently, the cause of the bird deaths and/or symptoms are unknown. Connections to pesticide exposure, the recent cicada emergence, and a possible viral illness are being explored. That said, no conclusions as to the cause of the illness have been made at this time. Diagnostic laboratories, including the USGS National Wildlife Health Center, are currently accepting and analyzing samples to learn more about the illness and to determine the cause.

What can you do?

Take down your bird feeders and empty your bird baths for 7—10 days. 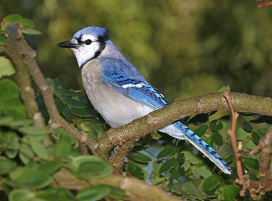 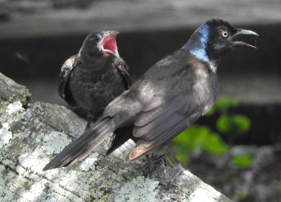 Blue jays (top) and common grackles (bottom) are some of several species that have been reported as sick/dying. 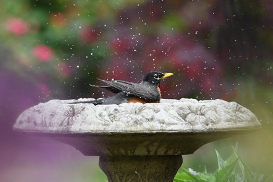 Listed by County (or visit wildohio.gov and click ‘Orphaned and Injured Wildlife’)

But won’t the birds go hungry/thirsty if I take down my feeders and bird baths?

Birds are hardy and resourceful. A temporary lapse in feeder food/water likely won’t set them back too much. More importantly, summer is when plants are producing nectar, seeds, fruits, and attracting insects, all of which serve as food for birds. There is often an abundance of natural foods for birds this time of year. Remember also that birds have the ability of flight, allowing them to travel further distances if needed to find food and water. Right now, it’s important to keep the safety of the birds a priority and take a break from feeders and baths until more is known about this outbreak.

CFAES provides research and related educational programs to clientele on a nondiscriminatory basis. For more information, visit cfaesdiversity.osu.edu. For an accessible format of this publication, visit cfaes.osu.edu/accessibility.