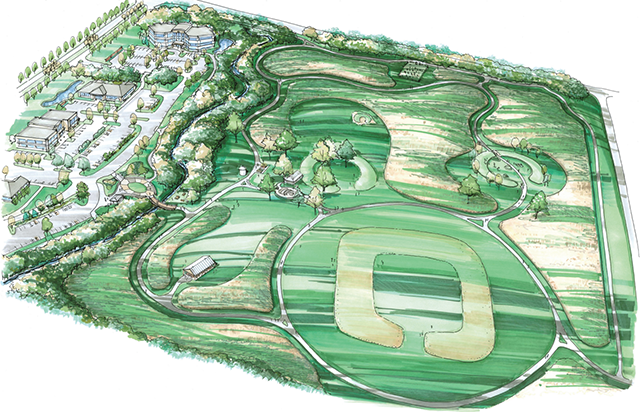 (Dublin, Ohio) Dublin City Council has approved the name of a new Dublin park. Ferris-Wright Park, formerly referred to as Holder-Wright Park, is slated to open this fall.

Located at the northeast corner of Emerald Parkway and Riverside Drive, the new Ferris-Wright Park and Hopewell Earthworks will preserve and showcase the ancient earthworks, farmhouse and natural features of the space that are a significant part of Dublin’s history.

The land surrounding the park has been home to many over the years, from the indigenous peoples of the Hopewell era to one of Dublin’s first settlers, John Ferris.

Archaeological records show many groups of tribes represented at this site, with the oldest dating back to Clovis times, or about 12,000 years ago. More recently, tribes during the Hopewell era built earthworks and mounds on the site around 200 B.C. to A.D. 400.

Earthworks are precise geometric shapes that held meaning and purpose, serving as ceremonial spaces for marriages and other celebrations, honoring the dead, making alliances, feasting and sacred games.

Ferris came to Ohio in 1818, eight years after Dublin was platted as a village. Ferris cleared the land for farming and built his farmhouse in 1820. It is said that his house was the first frame house in the area. The others were all log houses or log cabins.

The restored home, earthworks and mounds still stand today and will be open for visitors to explore in fall 2018. An opening ceremony is tentatively scheduled for Sunday, September 23 from 1–4 p.m.

Ferris-Wright Park will feature an interpretive center located in the farmhouse, honoring the past through interactive stations that tell the stories of inhabitants through the years. The park also features a pedestrian bridge over Wright Run Creek, walking paths, restroom facility, and a parking lot.