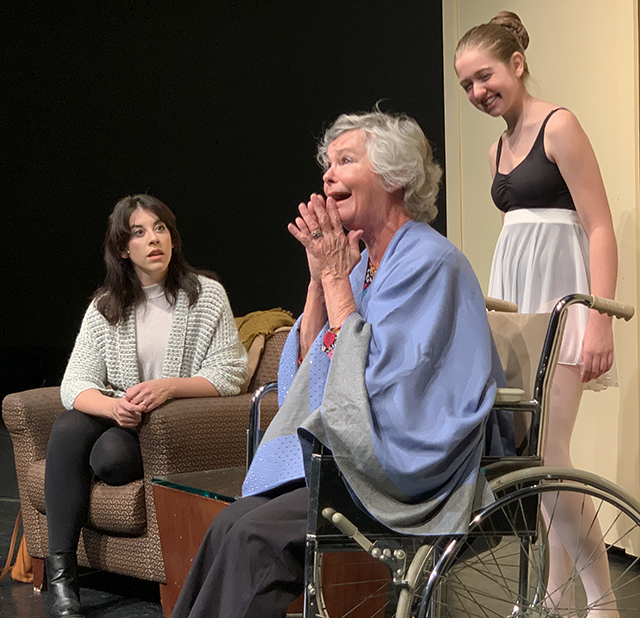 Original Productions Theatre (OPT) and the Abbey Theater of Dublin, as part of its ongoing Virtual Theatre Project, will present the world premiere production of “go to coda,” written by Columbus-based playwright Dave Morgan. The production will stream on-demand online from Nov. 20 through Nov. 29, 2020. Tickets are $5 per household and are available for purchase at DublinOhioUSA.gov/abbey-theater.

Worrell P. McConnell sits in the back yard of his country farmhouse and waits for his missing dog to return home when he suffers a seizure that sends him into an unconscious state. While his body is inactive, his consciousness and his instinct become personified, meet, and try to figure a way to get their body ambulatory and into the house ahead of an oncoming snow storm.

“We are honored to collaborate with Original Productions Theatre and present “go to coda” in its world premiere,” the Abbey Theater of Dublin’s Theater Supervisor Joe Bishara said. “This production has been completely conceived by a team of Central Ohio artists and provides ample drama, heart and humor – perfect for the whole family to enjoy.”

The cast of “go to coda” is as follows:

“The play, “go to coda,” addresses the critical importance of family and the idea that the most special person in another’s life is always present in the mind in some form,” writer/performer Dave Morgan said. “This world premiere production is an intriguing way to celebrate the season of Thanksgiving.”

Dave Morgan is an award-winning professional stage actor and writer based in Columbus, Ohio. He has worked on local and regional stages and is the co-founder and Artistic Director of Original Productions Theatre (OPT). He worked most recently on the CATCO and Evolution Theatre Company co-production of “Breaking the Code” and wrote and Directed the inaugural production of Orignial Theatre Productions, the world premire production of “How I Got Pluto.”

Joe Bishara (Director/Producer) has worked on over 200 theatrical productions at theatres across the United States as an award-winning actor, director, educator and producer. He is the Theater Supervisor for the City of Dublin (Abbey Theater of Dublin) and the creator of the Virtual Theatre Project. Joe is a passionate advocate for new theatrical works. He served as the coordinator for the Greater Columbus Arts Council (GCAC) Playwriting Fellowship Program from 2013 to 2019 and is a frequent guest clinician/director/instructor/lecturer for arts organizations, theatres and educational institutions across Ohio. He is a proud graduate of Ohio Wesleyan University, a member of Actors’ Equity Association (AEA) and an associate member of The Stage Directors and Choreographers Society (SDC).

A Look Ahead at 2021
Tweets by @DublinOhio