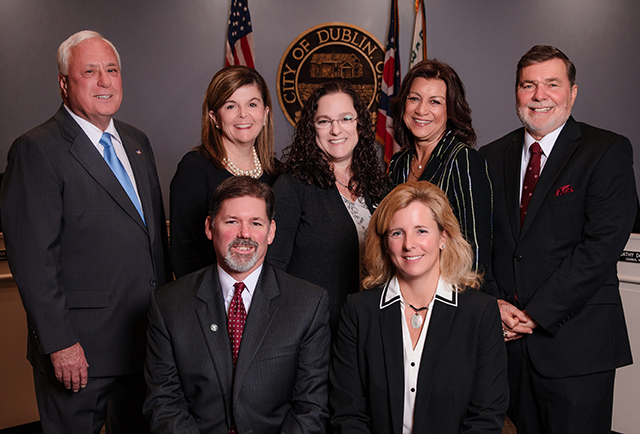 The Council is comprised of seven members – three elected at large and four elected from each of the four wards of Dublin. All Council members serve a term of four years.

The City of Dublin’s Council-Manager form of government combines the strong political leadership of elected officials with the strong managerial experience of an appointed manager.

As Dublin’s governing body, City Council adopts policies and passes legislation, establishes City goals and oversees and approves the annual budget. At the first regular City Council meeting in even-numbered years, Council chooses one of its members as the Mayor and one of its members as the Vice Mayor, each for a two year term. The Mayor presides at all council meetings and performs ceremonial duties and functions. The Vice Mayor performs duties in the Mayor’s absence.

The City Manager carries out day-to-day administrative operations and has broad authority to manage the organization. Dana McDaniel has served as Dublin’s City Manager since January 2015.

Dublin is a city of more than 47,000 residents located just northwest of Columbus, Ohio. It offers residents and corporate citizens responsive services, attractive housing, superior public education, direct regional highway access, abundant park space, thoughtful and strategic planning, innovative ideas and technology and a dynamic community life. Dublin is consistently ranked one of the safest cities in the nation and in 2015 was named one of America’s Top 20 Creative Class Cities. It is home to more than 20 corporate headquarters, an entrepreneurial center, 3,000+ businesses, world-class events and the urban, walkable Bridge Street District. For more information, visit DublinOhioUSA.gov or call 614.410.4400.

Have a Safe Independence Day