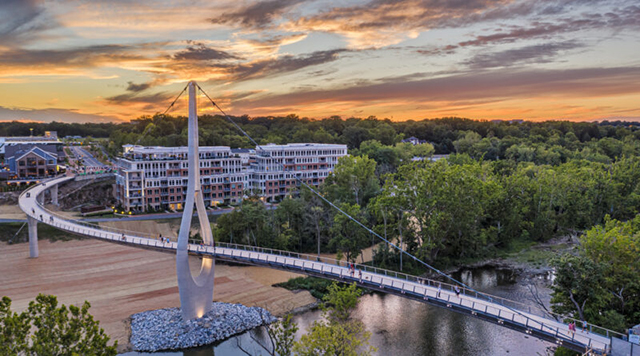 By Sophia Acevedo For decades, residents and local government in Dublin, Ohio have envisioned a pedestrian and bicycle bridge that could go across the Scioto River, providing easy connectivity among retail, restaurants, commercial, and residential buildings on both sides of the river.

In March 2020, the City of Dublin completed the Dublin Link, a 760-foot long pedestrian bridge, which has not only seen their vision come to life but it has created the longest single tower “S” shaped suspension bridge in the world.

“From the ‘S’ shaped bridge deck to the suspension design and state of the art lighting elements, this is truly a unique bridge,” Public Affairs Officer for the City of Dublin Lindsay Weisenauer says.

Plans for a scenic riverfront park and suspension bridge were envisioned by the Dublin City Council as far back as 1986, but their first major work began in 2007, when the City Council adopted a Community Plan which included a pedestrian bridge that would connect the east and west sides of the Scioto River. The City Council went back and forth in discussion for a couple of years, until in February 2017 funding for the project came through the City of Dublin Capital Improvements Program (CIP).