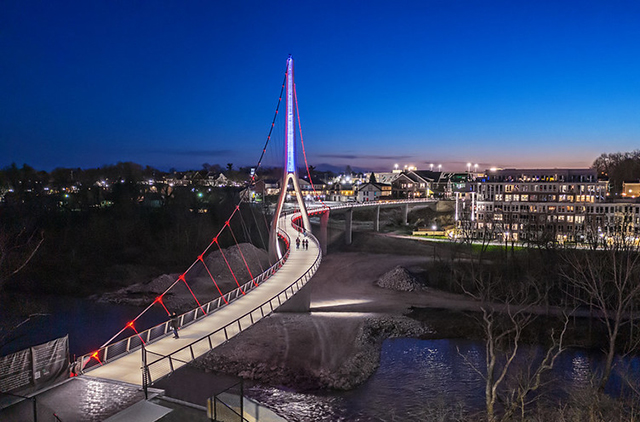 Farmington Hills, Mich., – The Slag Cement Association (SCA) is recognizing The Dublin Link with a Slag Cement Project of the Year Award for green design.

The use of slag cement has demonstrated long-term performance enhancements allowing designers to reduce the environmental footprint of concrete while ensuring improved performance and increased durability.

The Dublin Link pedestrian and bicycle bridge, which opened in March 2020, is a signature project for the City of Dublin and has unique geometric qualities associated with all exposed concrete. Slag cement was used in every mixture on the project to meet permeability requirements, reduce early heat of hydration and for its aesthetically pleasing effects on concrete.

“The rise in DOT and infrastructure projects we are seeing reflects the increase in demand for materials that enhance concrete’s durability, resiliency, and ultimately the value of concrete,” said SCA Board President, Ed Griffith

The Slag Cement Project of the Year Awards ceremony was originally scheduled to be held at the American Concrete Institute (ACI) Spring Convention on April 1. However, the event was postponed due to state shutdowns. SCA plans to hold the in-person ceremony at the Fall ACI Convention in Raleigh, NC, tentatively scheduled for the morning of October 28, 2020.  In the meantime, the SCA wanted to digitally honor these outstanding projects for their use of slag cement.

Twelve construction projects from across North America were chosen to showcase the broad applications of slag cement and its impact on creating more durable, resilient and sustainable concrete. Two research projects on slag cement use are also being honored in this year’s program.

Unique to this year’s round of applicants, the program has seen more state and municipal infrastructure projects than usual. This year’s winning project teams include four state Departments of Transportation (DOT), two Canadian procurement authorities, one bridge authority and the Florida Army National Guard.

This pedestrian and bicycle suspension bridge is a signature project for the city of Dublin, Ohio and has unique geometric qualities associated with all exposed concrete. Slag cement was used in every mixture on the project to meet permeability requirements, reduce early heat of hydration and for its aesthetically pleasing effects on concrete. The mass concrete mixture was 6,000 psi self-consolidating mixture comprised of 730 pounds cementitious material, with 65 percent slag cement.

The project consisted of the removal and replacement of 2,000 cubic yards of aircraft apron. The mixture consisted of a 50/50 blend of type I cement and slag cement. The average flexural strength for this mixture was 600 psi in seven days and 890 psi in 28 days. Michael Baker International designed the project and approved the concrete mixture design knowing the benefit of slag cement for superior workability, strength gain, durability and the overall appearance.

The Chase Center is home to the San Francisco Golden State Warriors and includes an 18,000-person arena, 580,000 square feet of office space, 100,000 square feet of retail space, a parking facility, and public plaza/recreation area. Slag cement was used for its durability benefits, higher strength gains and its sustainable benefits to achieve LEED credit points. Concrete mixtures were designed to obtain 6,000 to 8,000 psi strength which was achieved. Special 8,000 psi shotcrete was used to replace cast-in-place concrete.

This 18-floor, mixed-use structure includes 10 floors of parking, eight floors of apartments and two floors of retail space at the bottom. Thirty percent of slag cement was used in the garage portion, as well as all elevated slabs, walls and columns. Slag cement helped create durable concrete with consistent results that achieved designated project strength requirements.

The Dr. Phillips Center for the Performing Arts is a high-profile venue located in the heart of downtown Orlando, Fla. The foundation of this project ran the length of a city block and included 5,000 cubic yards of temperature restricted mass concrete. The specification was changed from 50 percent slag cement to 70 percent slag cement to help lower maximum internal temperatures.

This project includes two mat foundation pours for a high-rise condominium complex in Miami, Fla. The mat foundations (9,000 cubic yards of concrete each) include a 40 percent slag cement mixture to help reduce thermal heat in the mass concrete. The use of slag cement also helped achieve concrete strength and durability requirements.

This project was uniquely critical in providing stability for underground mine chambers storing a large quantity of arsenic trioxide. The risk of releasing the arsenic trioxide into the environment added urgency to the remedial work. Because slag cement releases a more moderate of heat of hydration than that of pure ordinary portland cement (OPC), the thermal gradient was limited such that it did not create cold joints due to the material curing too quickly. A 90 percent slag cement mixture was used on this project.

This project consisted of 66,575 cubic yards of new Florida DOT plane cement concrete pavement construction on SR 50 and Interstate 75. The cross section was a 12.5 inches concrete pavement section on an asphalt prepared base. The mixture consisted of a 50/50 blend of type I cement and slag cement. The average compressive strength for this mixture was 2760 psi in three days and 4040 psi in five days. Achieving timely and reliable early strength was important on this project, allowing dowels to be drilled within a few days so that the adjacent lanes could be promptly poured. Slag cement was also considered an aid for easier placeability and improved workability with challenging access conditions.

I-41 Interchanges and Bridge

This project consisted of the reconstruction of Roland Kampo Bridge, a new bridge adjacent to the North, a new flyover ramp and the reconstruction of several interchanges between US Highway 10, State Highway 441 and Interstate 41 in Wisconsin. The project team decided to utilize 30 percent slag cement in the mixture design to meet Wisconsin DOT specifications for high-performance concrete with a rapid chloride permeability requirement of less than 1,500 coulombs. The use of slag cement was vital in order to meet the reduced permeability requirements of the project.

The Peace Bridge, located in Buffalo, NY is the second busiest border crossing between the United States and Canada. It measures 3,580 feet in length and includes three traffic lanes and two pedestrian sidewalks on each side. A 40 percent slag cement mixture was utilized to help meet a list of performance testing requirements for the project including but not limited to chloride permeability resistance, alkali silica reactivity and compressive strength. Originally the project did not allow the use of slag cement and required fly ash to be used. Based on the duration of the project, the ready mixed supplier’s lower capacity for ash, and the extensive testing needed, acquiring fly ash from a single source would have been difficult, leading the team to use slag cement instead.

Sarah Mildred Long Bridge Project is an important regional crossing linking Maine and New Hampshire across the Piscataqua River. The new 2,800-foot concrete vertical-lift bridge replaced the existing combination steel ach and through truss bridge that was built in 1927. Concrete mixtures containing slag cement were used to increase strength and durability as well as for aesthetic reasons. Slag cement was used to reduce concrete permeability and lower the water-cementitious materials ratio which helped improve the workability and durability of the concrete. Replacement levels ranged from 35 to 50 percent throughout the project.

This seven-story tower was added to the hospital campus to provide more private rooms, a labor and delivery unit and breast cancer services. Mixture designs on this project ranged from flowable fill to 10,000 psi structural concrete. All mixtures contained 18 to 20 percent slag cement for LEED qualification, permeability concerns and to achieve the high-performance requirements of 10,000 psi.

Cement production accounts for about 5 percent of total man-made CO2 emissions. An effective way to reduce the amount of ordinary portland cement (OPC) in concrete is to replace a portion of the OPC with SCM. While many SCMs exist, a significant problem associated with them is reductions in early-age concrete strength, especially at high SCM replacement levels. Ground granulated blast furnace slag (GGBFS) can be used replace up to 70 percent of the OPC, without significantly reducing early-age properties, and is an attractive SCM when considering both sustainability and durability. In both developing and developed countries, BFS appears to be a viable SCM not only at present, but also in the future because GGBFS is ubiquitous in the manufacturing process.

In the current study, a reactivity test that can be used for rapid classification of GGBFS and other SCMs is shown. The reactivity of GGBFS from different sources is quantified and compared with other SCMs. Furthermore, one GGBFS is used as replacement for OPC at levels of 20, 40 and 60 percent to study the effects of the GGBFS on cementitious paste properties such as heat release, compressive strength, and bulk resistivity.

Congratulations to the 2019 Slag Cement Project of the Year Award Winners, and SCA looks forward to celebrating each project at the in-person ceremony later this year. The SCA has been running its annual awards program since 2010. Current and past award winners are featured at slagcement.org. Nomination forms for the 2020 Slag Cement Project of the Year Awards program are now available and can be found at slagcement.org. Nominations for the 2020 program close November 1, 2020.