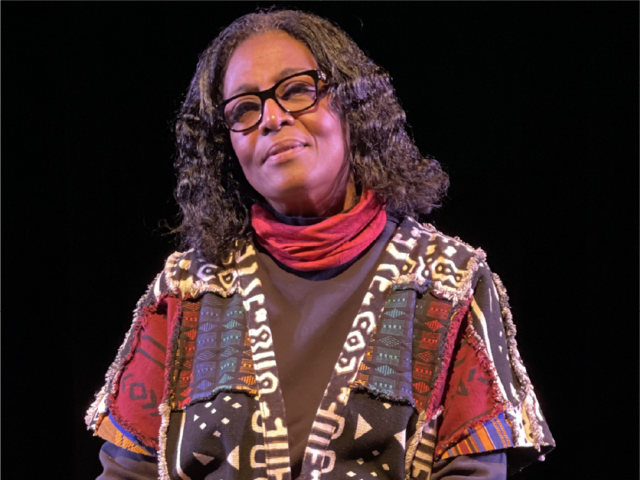 (Dublin, OH) The Abbey Theater of Dublin, as part of its ongoing Virtual Theatre Project, will present the world premiere production of the one-women play “Diary of Recovering Daughters,” written and performed by award-winning, Columbus-based Theatre Artist Julie Whitney Scott. The production will premiere at 7 p.m. on Jan. 21. The Abbey Theater of Dublin will offer a limited number of tickets for an in-person experience for the premiere, which will simultaneously be live streamed for those who choose to watch the performance from home. Encore on-demand streams will be available through Jan. 28. Tickets are $10 per household and are available for purchase at DublinOhioUSA.gov/abbey-theater.

Zola, a retired African American female counselor, looks back on her years of being a mental health and chemical dependency counselor. As she packs up her office on her last day of work, Zola embodies five of the women whom she counseled — their struggles and the similarities between their life and Zola’s own journey with recovery.

“We are honored to collaborate with Julie Whitney Scott to present “Diary of Recovering Daughters” in its world premiere,” the Abbey Theater of Dublin’s Theater Supervisor Joe Bishara said. “This production provides ample drama, heart and insight into the critical importance of mental health care and counseling.”

Writer/performer Julie Whitney Scott said “‘Diary of Recovering Daughters’ is a collection of the many women whom I have counseled throughout my 30-plus years as a counselor on the state and county level. This piece is intended to give the five women their justice and voice. My hope is that the piece will speak for/to other women who have been silent.”

Julie Whitney Scott is an award-winning Theatre Artist, Producer and writer based in Columbus, Ohio. She is a published author, poet, radio producer/host for WGRN.org/WGRN FM 94.1 and a freelance writer for The Columbus Free Press. Julie is the founder and Artistic Director of Mine 4 God Productions, a member of Central Ohio Theatre Roundtable and has produced and written/directed over 14 staged plays. Julie has a bachelor of science degree in counseling from Franklin University in Ohio and served over 30 years in the field of mental health and retardation as an Ohio State Chemical Dependency Counselor, Case Manager, Resident Manager, Supervisor, Team Leader, Coordinator and retired as a Hearing Officer for Franklin County Department of Job and Family Services.

Joe Bishara (Director/Producer) has worked on more than 200 theatrical productions at theatres across the U.S. as an award-winning actor, director, educator and producer. He is the Theater Supervisor for the City of Dublin’s Abbey Theater of Dublin and the creator of the Virtual Theatre Project. Joe is a passionate advocate for new theatrical works. He served as the coordinator for the Greater Columbus Arts Council (GCAC) Playwriting Fellowship Program and is a frequent guest clinician, director and instructor for arts organizations, theatres and educational institutions across Ohio. He is a proud graduate of Ohio Wesleyan University, a member of Actors’ Equity Association (AEA) and an associate member of The Stage Directors and Choreographers Society (SDC).