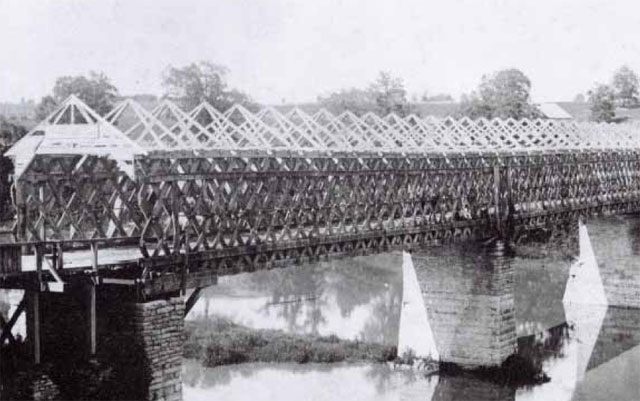 In 1885, a steel bridge was erected. It supported modern motorized vehicles and served the Village of Dublin for nearly half a century.

In 1935, the new stone bridge was selected as a state and federally funded Works Progress Administration (WPA) project. Following a bid process, the construction project was awarded to E. Elford and Sons of Columbus for $272,203.35. The construction moved at an extremely rapid pace with 130 men working two five-hours shifts, six days per week. The stone bridge opened just before Christmas, 1935.

During the Great Depression, the WPA funded many projects to help stimulate the economy. Other notable WPA projects included the Hoover Dam, Chicago’s sewer system and New York’s LaGuardia Airport. Between 1935 and 1943, the WPA created almost eight million jobs and, at the time, was the largest employer in the United States.

By the mid 1980s, the two-lane Bridge Street Bridge that served as the village’s primary east-west link for more than 140 years needed to be widened. Traffic was so restricted by the two-lane bridge that it was nearly impossible to get in and out of Dublin during rush hours. The bridge closed on February 3, 1986. The new four-lane bridge opened on October 15, 1986.

The Dublin Spring was the main source of water for pioneers and travelers. Located on the west bank of the Scioto River just south of the Bridge Street Bridge, Dublin historian Emmett Karrer states, “Dublin wouldn’t be here today if it weren’t for the small spring.”

The spring was one of the natural features that John Sells sought to build a town. These features included the river for transportation, high banks for safety from flooding, wood for building cabins, stone for building other permanent structures and a viable drinking source. As you stand by the spring you can see all of these essential components.

Dublin local Herb Jones recalls fetching water from the spring back in the 1950s. His mother enjoyed having a fresh cup of tea and sent Herb to the spring each morning. As a young boy, he would make his way down the bank to the spring to fill a gallon jug with fresh drinking water for her tea.

In 1991, the Dublin Kiwanis organized efforts to improve the area surrounding the Dublin Spring for public enjoyment. The stairs were constructed by the City of Dublin in 1996. Today the spring water is no longer safe to drink.