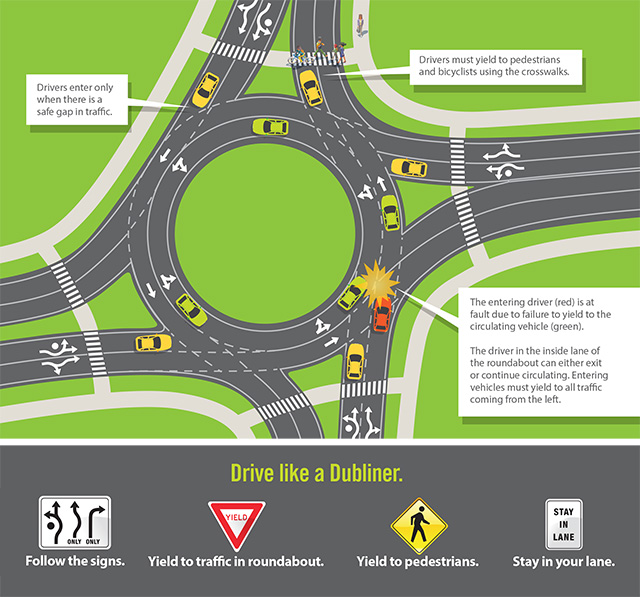 Rules of the Road

Roundabouts are one of the most effective intersection control treatments available with the added benefit of calming traffic. They limit vehicle speeds to approximately 20 mph and can control vehicle speeds on four streets simultaneously. Roundabouts typically reduce crashes by 40 – 60 percent, reduce injury by 35 – 80 percent and almost completely eliminate incapacitating injury and fatal crashes.

Community gateways and main streets are effective locations for roundabouts as they slow traffic and provide space for an aesthetically pleasing entrance treatment. In addition to the beauty they can provide if landscaped well, roundabouts slow traffic and help pedestrians cross the street.

There are two basic premises in which roundabouts achieve crash reductions of 40 to 60 percent when compared to traffic signals and greatly reduce severity on those few crashes that do occur. One is the simple decision making and the second is the low level of conflicts. At a four-way intersection there are 32 possible conflict points between vehicles and only eight at roundabouts. Pedestrians face six conflicts when crossing only one leg of the road whereas at a roundabout they only have two.

Research shows that drivers quickly adapt to the roundabout traffic flow. For instance, Vail and Avon, Colorado, both feature many high capacity roundabouts and are major tourist destinations with thousands of first-time roundabout drivers using the roundabout intersections each year. Despite large numbers of drivers who have not driven roundabouts previously, these intersections work well and do not confuse motorists. Proper use of signing and road striping at roundabouts assists motorists and minimizes the potential for confusion.