Native Americans – Hopewell, Adenas, Delaware, Shawnee and Wyandot – were the first inhabitants of the countryside that was to become Dublin. The Hopewell left several mounds, one of which will be incorporated into a City of Dublin park and education center. Today’s Historic Dublin includes a section or about 800 acres of land given to Lieutenant James Holt by the Commonwealth of Virginia as payment for service in the Revolutionary War. This part of what became Ohio was known as the Virginia Military District.

Ludwig Sells and his sons scouted along the Scioto River and decided on  this site about 1803. It is on a portion of the Scioto River which was recommended because it is the highest point of land along the entire river and very unlikely to flood. Resources were plentiful for farming and hunting and building materials like stone and timber were in great supply. John Sells, one of the brothers, platted part of his land to establish a village in 1810. He asked John Shields, the surveyor who platted the site for him, to name the village which up to then had been known as Sells Settlement. Shields named it Dublin after his home in Dublin, Ireland. Today, the site of Sells’ original purchase is known as Historic Dublin.

Several founding families followed one another from Huntingdon County, Pennsylvania. Most of these families were of German and  other European heritage: Karrer, Ashbaugh, Horch, Ebey (Aebi), Geese, Leppert, Hayden. Despite Dublin’s name, very few Irish families were among those finding a home in early Dublin.

The Indian Run and Scioto River providing the power to drive machinery for mills built by industrious men. Mills cut trees for improved building materials and they ground grains for a variety of uses. There were three grain mills on the Scioto River during the early years.

Dublin was a farming community with businesses supporting the farmers. Another sector of business was tavern and lodging for travelers primarily along the coach road now called Route 161. People needed a place to stay for the night, a meal, and horses had to be put up and fed. Stone quarrying became a big business as means and machinery allowed men to blast and move rock and stone efficiently in large quantities. During the early stone quarry years, Dublin gained a reputation as a rough town. There was a refrain heard in many of the bars in the late 1880’s:

Dublin, city of beautiful roses,
Gouged-out eyes and bloody noses
If it weren’t for the solid rock foundation
It’d be gone to hell and damnation!

Here is a surprising fact about Dublin: Four great-grandsons of Ludwig Sells, Dublin’s founding father, got together and bought into the circus business. They started with a small circus show around 1870 and grew by acquiring other circuses until they had the largest circus in the world for a time, finally closing in 1905.

Life in Dublin continued for many years with little change. Some locals describe the village as a “poor farming town” and photos of the buildings in the years before the 1970’s confirm that.

In the 1970s, Dublin began to transform from a rural village into a suburban business center. Contributing factors include Ashland Chemical Company’s decision to locate a new building in Dublin. Another was the decision to include a ramp to Dublin at the I-270 outerbelt and a third is the development of the Muirfield Village Golf Club and residential community. These three put Dublin on a trajectory for growth.

The quality of Dublin’s commercial construction was established early with the development of Metro Center and the Midwestern Volkswagen “MidVo” complex (the buildings now are part of OCLC). With rapid business and residential growth, Dublin officially became a city in August 1987.

Through well-managed growth, Dublin has preserved its historic past while enriching the quality of life within the community. Early 19th century architecture and dry-laid limestone fences bordering its roads add to Historic Dublin’s heritage. Many of its original buildings are listed in the National Register of Historic Places.

In 2004 the City of Dublin wrote a history of the village and city, “Dublin’s Journey”.  The book tells many of the characteristics that contribute to the character of our community including landscaping regulations put in place when the village was in a forming state of development. The city manager form of government is another. Citizen participation in government, bed tax, park land set aside in developments, and many more add to our city’s quality of life.

“Dublin’s Journey” contains more great history stories including the legend of Leatherlips, the Wyandot chief memorialized with the sculpture in Scioto Park and how Dublin lost the chance to become the capital of Ohio in a poker game. The book tells about Jack Nicklaus’ inspiration for The Memorial Tournament and how the Dublin Irish Festival grew from a small party on the Coffman Park tennis courts to one of the largest festivals in the country attracting over 110,000 visitors and growing annually. 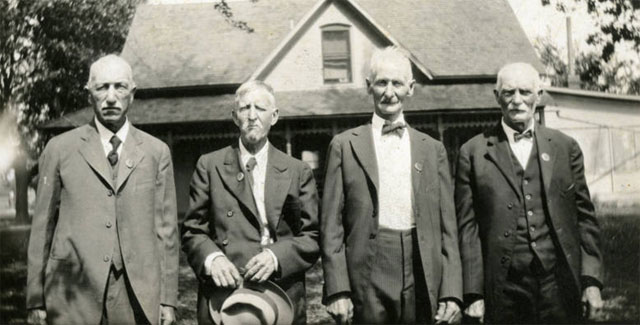 View the Digital Scrapbook for the Bicentennial and Beyond

A collaboration between the Dublin Historical Society, the Dublin Branch of the Columbus Metropolitan Library, and the City of Dublin, the Dublin Memory Project was awarded a grant from the City of Dublin in 2009 to help celebrate the Bicentennial in 2010. The grant allows the partners to gather and promote, research and catalogue, digitize and preserve Dublin’s history for in-person and on-line access. We are assembling Dublin’s digital “scrapbook.”