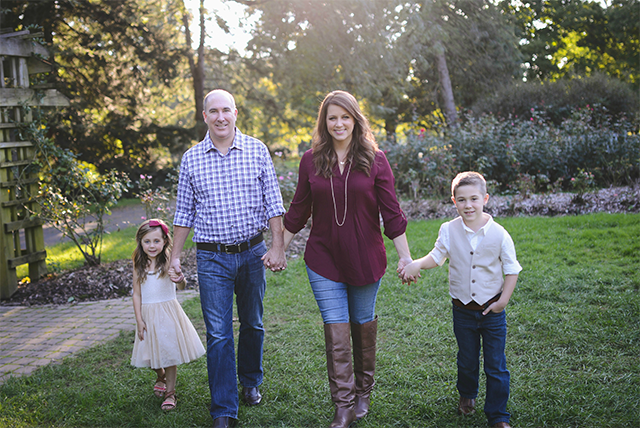 A “smith” is a craft specialist like a wordsmith or a blacksmith. The Smith family crafts community. Jeff Smith, wife Nicole, son Taggert, 7, and daughter Jovie, 6, volunteer for Dublin.

“The kids saw me volunteering so they wanted to volunteer, too,” said Jeff who assists on the Dublin Irish Festival’s Volunteer Committee. He oversees the needs and functionality of the large number of festival volunteers. Jeff likes the sense of comradery with the other committee members.

“The kids wanted to volunteer at the Irish Festival too, but they weren’t old enough,” he said. “The City initiated the leadership for the K.I.D.S. (Kids in Dublin Service) program. They went to the first event.  That’s how they got involved. They volunteered in the park and the senior center.”

The City started the K.I.D.S. program two years ago to create volunteer opportunities for children. “It’s designed specifically for kids,” said Jeff.  “I can drop them off and not worry. They love all of it! Jovie didn’t want to leave.”

“We made seed bombs in the park,” added Taggert. “You put seeds in clay and throw them in the woods. I cleaned up soda cans. My sister collected bottle caps.”

Taggert and Jovie also made paper flowers at the Avondale Senior Center and read stories with the residents. Nicole chaperoned the children and interacted with the seniors.

Helping out isn’t just for warm weather. At the Christmas tree lighting the children passed out treats and glow necklaces volunteering along with mom and dad.

Nicole was born and raised in Dublin. After almost 40 years Jeff feels homegrown, too. “I felt a sense of ownership to give back about seven years ago when Nicole was pregnant with Taggert,” said Jeff. “We love Dublin. I want to instill that in my children.”

Since the kids started volunteering, Jeff added, “It’s been neat too, because more City employees know my kids than me. They have a pride about living here.”

“The teams are assigned by neighborhood so it’s a great way to meet other parents,” he says. “The kids are on the same team as their classmates. It helps to create a sense of community—we help each other with carpooling. It makes the community smaller.”

The Smiths are shaping the next generation of volunteersmiths.

The Volunteer Spotlight series shines a light on the City of Dublin’s valued volunteers. To recommend a deserving volunteer, or to inquire about volunteer opportunities, email volunteer@dublin.oh.us.