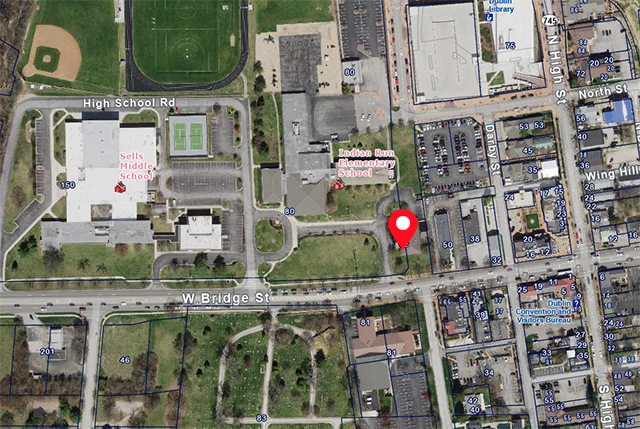 Update: Demolition of 62 W. Bridge Street is scheduled to begin Monday, March 28, in support of the Franklin Street extension project. Impact to traffic should be minimal and the project is expected to last the duration of the week. The timeline is subject to weather conditions. Demolition was scheduled to coincide with spring break to ensure student safety.

Beginning in 2016, the City of Dublin (the City) and the Dublin City School District (DCSD) worked cooperatively to facilitate the redevelopment of the new Dublin branch library by the Columbus Metropolitan Library (CML) and the surrounding streets, including the proposed extension of Franklin Street (North) from West Bridge Street to North Street. The City and DCSD executed an agreement on February 27, 2017, reflecting the mutually beneficial terms agreed to by the parties and provided the necessary real estate that included the building at 62 West Bridge Street. In exchange, the City performed a series of technology infrastructure enhancements to various Dublin schools that have previously been installed. The property rights were conveyed to the City on February 27, 2017, and the City agreed to lease the building to DCSD.

The agreed right-of-way was recorded with the Franklin County Recorder in 2017 for the future alignment of Franklin Street north of West Bridge Street, extending through the 62 West Bridge Street building. An addendum to the lease agreement was signed on August 3, 2018, which specified Termination Rights of the lease. The lessor may terminate the lease at any time after the conclusion of the 2019-2020 academic school year by providing in writing a six (6) month notice of its intent to construct the northern extension of Franklin Street.

The site will be temporarily restored (graded and seeded) and made safe following the demolition and before the construction of the Franklin Street extension.