Dublin Careers – More Than a Job 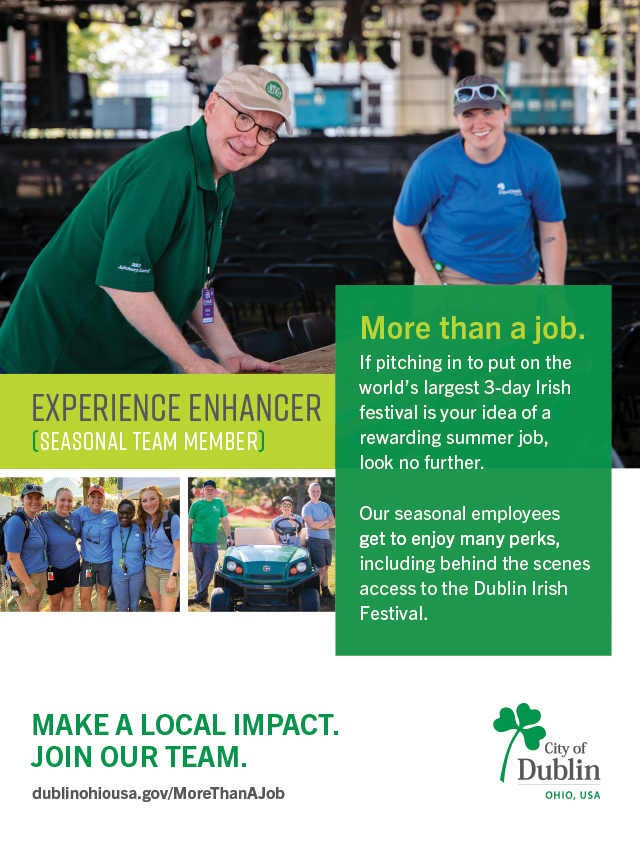 Dublin, Ohio, USA is a progressive, well-educated and innovative city surrounding the Scioto River in the northwest area of metropolitan Columbus.

Approximately 25 square miles and home to 43,000 people, the City annually hosts Jack Nicklaus’ PGA Tour Memorial Tournament at Muirfield Village Golf Club and one of the nation’s largest Irish cultural events – the Dublin Irish Festival. In 2014 and 2012, Dublin was recognized as the Most Outstanding Global Festival and Event City in the World by the International Festivals and Events Association.

Dublin has long been recognized as a premier community, not only locally, but also internationally. Home to Ohio’s largest corporation, Cardinal Health – 21 on the Fortune 500 list, Dublin also is the headquarters of the Wendy’s Company and OCLC..

Dublin’s diverse and sound economic base provides the foundation for the present and future stability of the City. The City’s continued economic vitality is the result of quality development, strategic planning and aggressive efforts to attract and retain high-quality commercial development.

All three high schools were named to Newsweek’s 2012 list of top high schools in the country. With 25 institutes of higher learning in Central Ohio, including The Ohio State University, the region offers a pipeline to 115,000 college students and 20,000 annual graduates.

Dublin’s largest source of funding is income tax revenues, which are allocated 75 percent to the General Fund and 25 percent to the Capital Improvements Program (CIP). Dublin’s healthy tax base provides the resources necessary to keep pace with the city’s growth and underwrite the high quality of life enjoyed by Dublin’s corporate and residential citizens.

The CIP establishes a fiscally sound plan for Dublin’s future investment in capital infrastructure and provides financial guidelines that identify available revenue sources, debt capacity and policy for projecting revenues and designating reserves to be maintained.

These ratings reflect the cooperative efforts of private citizens, civic leaders, government officials and business representatives. Such widespread commitment to the community ensures that Dublin will remain one of the most desirable suburbs in Central Ohio and the Midwest. 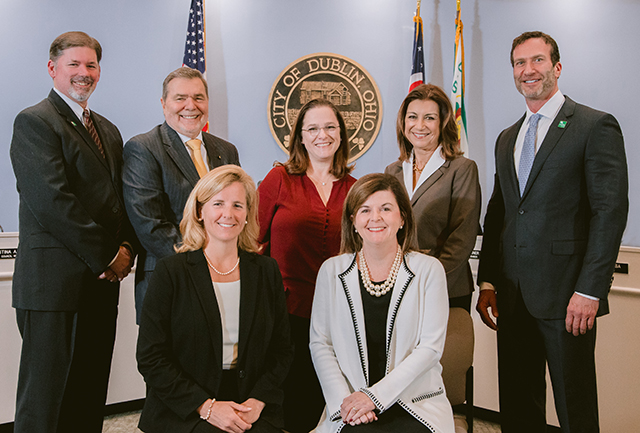 The City of Dublin is an award-winning local government organization known for its professionalism, vibrant spirit, customer service orientation and a strong commitment to distinctive and well-planned community development. We excel in a dynamic, fast-paced, achievement-oriented culture distinguished by our participative leadership style and collaborative working relationships.

The City of Dublin is a “Home Rule” municipal corporation operating under the authority of our own Charter.

Dublin City Council is comprised of seven members – three elected at large and four elected from each of the four wards of Dublin. All Council members serve a term of four years. As Dublin’s governing body, City Council adopts policies and passes legislation, establishes City goals and oversees and approves the annual budget. The presiding officer of Council is the Mayor, who is elected by fellow Council members for a two-year term.

The City Manager is supported by a Management Team that consists of directors, managers and other professional administrators who are accountable for strategic, tactical and operational management of their initiatives and leadership of their employees. The Director of Public Service is a member of the Management Team.

While international recognition and financial security are very important to the growth of our community, what sets us apart is the deep expertise and rich experience of our employees. The City of Dublin has 20 principal organizational units comprised of 368 full-time permanent positions and approximately 232 part-time and seasonal positions. Each day, this dedicated team of public servants is committed to delivering high quality services, fair and transparent governance and stewardship of public funds that maximizes accountability and efficiency in local government.

Each year, the City of Dublin prepares an extensive five-year Capital Improvements Program (CIP) to identify capital projects. Our total expenditures for 2016 were $283.4 million, an increase of 15% over 2015 largely due to a significant increase in capital expenditures using loan and bond proceeds.

These long-term investments throughout the community include improvements to the 270/33 Interchange, the construction of two parking structures within Bridge Park and park improvements. Watch this video to learn more about some of those projects.

Purpose – The City of Dublin, Ohio, secures the benefits of home rule and exercises the powers of local self-governance as conferred by its Charter, the Constitution and the laws of the State of Ohio for the governing of our City.
– Preamble, Revised Charter of Dublin, Ohio

Mission – We are and always have been a proud local democracy. In our service, we strive to provide the best quality of life and environment in which our residents and businesses can thrive.
We seek to ally our proud traditions with the best innovations of the future.

Leadership Philosophy – We are members of an organization that succeeds because of teamwork, dedication, diversity and the innovative spirit of all of our members. Together, we build a culture of trust, service, mutual respect, inclusion and open communication. We hold ourselves mutually accountable to promote and sustain continuous learning and to develop the learning potential that exists in every member of our team.