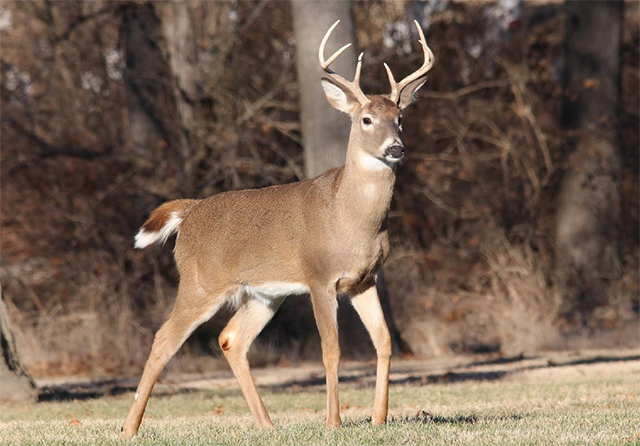 The white-tailed deer, commonly referred to as the whitetail, is perhaps Ohio’s best-known wildlife species. It is seen in the state’s wildlife areas, parks, and nature preserves as well as in the backyards of rural and suburban residents. The state’s only big game animal, it has provided table fare for generations of the state’s inhabitants from Native Americans to thousands of sportsmen and women today.

White-tailed deer are an Ohio comeback success story. Ohio deer were eliminated from the state in the 1800s. With no hunting regulations and radical environmental changes due to clear cutting and farming, deer were once seldom seen. Spotting a deer was headline news in local papers. With regulated hunting, reintroduction of deer in the early 1900s and the return of woodlands over time, deer populations have increased tremendously, especially in urban areas were deer are not hunted and there are few natural predators.

White-tailed deer are common throughout Dublin. Ohio‘s largest herbivore, white-tails feed on a variety of foods. Depending on the season their diet may consist of bark, fruits, twigs, acorns and an assortment of plants.

Their coloration changes from red tones in the summer to more grey/brown tones in winter. White-tailed deer rely on stealth to hide themselves. They tend to move slowly and deliberately, blending in with their surroundings. They rely on their speed to escape danger.

White-tailed deer can reach speeds over 30 mph. They are named for their white tail, which signals danger to other deer and tells predators they are leaving. Deer also have an incredible sense of smell, great eyesight and fantastic hearing, all of which help them detect danger.

Rearing one to three young per year, does are more communal and are frequently seen in groups, especially in winter months. Female offspring often stay with their mother for more than a year, but young bucks separate from their mother after about 12 months.

More solitary, bucks start growing antlers in the spring. Antler size has less to do with age than with genetics and health. Antlers are shed in late winter and are quickly eaten by many small mammals for their high vitamin and nutrient content.

White tail deer are beautiful, graceful animals, but they can also cause concern, car strikes and landscape damage being the most common.

Because deer have no upper front teeth they tend to leave uneven, scraggly bite marks on plants they’ve been eating. Other animals such as rabbits tend to leave much cleaner, angled cuts. Additionally, deer sometimes leave a squared off bite.Deer also leave rubs or scrapes on trees. Scrapes are made by the lower front teeth and are usually mistaken for rubs which are made by antlers. Usually rubs occur in the fall when a buck is shedding the velvet off his antlers. Rubbing not only helps remove velvet, but also scents the tree, helping the deer mark his territory.

Foot prints and droppings are further signs that deer have visited your yard. Droppings – usually oblong, rounded and dark in color – are usually left in feeding areas. Footprints have a somewhat heart-shaped appearance with two lobes forming a point at the toe.

Nothing works all the time. A hungry deer will persist to eat our plants where once they had woods and meadows and wetlands and creek buffers. A good goal is to keep them on the move so they are only doing a small amount of damage in any one area.

Whitetail deer fawns in Ohio are usually born between April and July. Read more about how to tell if fawns are nearby, if a doe is being defensive, and what to do.

Call the Dublin NON EMERGENCY police number at 614.889.1112 to report a sick or injured animal.

If you encounter a deer make yourself look large, and hide behind a tree or vehicle if you think your safety is at risk. If a deer has entered a building or is endangering people because of its behavior or injury, call 911 for assistance and be sure to tell the dispatcher this involves a live deer and describe the situation.